US, Russia seek to bridge divide over Syria | World| Breaking news and perspectives from around the globe | DW | 08.05.2013

US, Russia seek to bridge divide over Syria

For more than two years, Washington and Moscow have been at loggerheads over Syria, as the civil war there continued to escalate. But now, the former Cold War foes are promising to bridge the diplomatic divide. 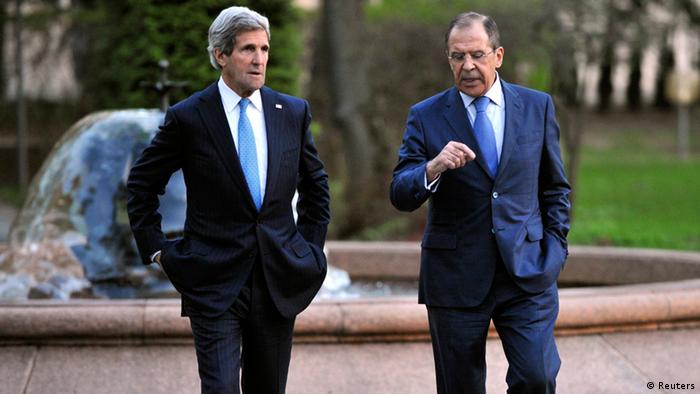 If one were to take US Secretary of State John Kerry at his word, then the diplomatic stalemate between America and Russia over the Syrian civil war seems to have been a miscommunication. During talks in Moscow, Kerry told Russian President Vladimir Putin that the US and Russia have "very significant common interests" in pushing for a negotiated settlement to the conflict in Syria.

"The alternative is that Syria heads closer to an abyss, if not over the abyss and into chaos," Kerry told a joint news conference with Russian Foreign Minister Sergei Lavrov on Tuesday. 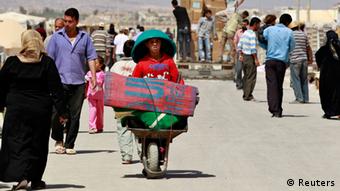 The UN continues to warn of a deteriorating humanitarian situation

The secretary of state's push for Russian cooperation comes as the civil war in Syria has taken on troubling new regional and international dimensions in recent days.

Israel twice bombed targets outside of Damascus last weekend, reportedly in an attempt to prevent Iranian guided missiles from falling into the hands of the Shiite Islamist militant group, Hezbollah.

The Israeli airstrikes came after the United States and its British and French allies claimed to have mounting evidence that chemical weapons had been used in Syria. The three Western powers have accused President Bashar al-Assad's regime of deploying the chemical agent sarin against rebel forces and civilians. Damascus, on the other hand, has accused the rebels of using deadly chemical agents.

"Kerry is following up the US administration's stated goal of leading a diplomatic effort that was to include unifying the opposition and coordinating an international response," Waleed Hazbun, director of the Center for Arab and Middle East Studies at the American University of Beirut, told DW via email.

"But even on the humanitarian level, the US effort is viewed regionally as lacking," Hazbun said.

For the past two years, the United States has repeatedly faced off diplomatically with China and Russia over the conflict in Syria. Fresh off its victory in Libya, the US adopted a hard-line position toward Damascus early in the conflict, making President Assad's departure a pre-condition for a negotiated settlement. 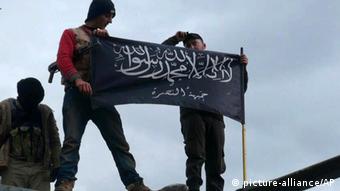 The US does not fully trust the rebels, which include Islamist militants

"America has had a completely unrealistic vision of how diplomacy was going to be carried out, and they may have done that intentionally because they didn't really want diplomacy, and they thought they were going to get a quick win," Joshua Landis, director of the Center for Middle East Studies at the University of Oklahoma, told DW. Landis also runs the blog syriacomment.com.

Three different US-backed UN Security Council resolutions condemning the Assad regime have failed over Russian and Chinese vetoes. Moscow, which leases a naval port at Tartus and is a weapons supplier to Damascus, has consistently refused to support calls for Assad to step down.

"The US seems to have limited leverage in the Levant and actually quite limited goals," Hazbun said. "Both its post-Cold War vision for the region and the Bush administration's plan for regional transformation are now history, and Obama seeks to modestly conserve core US interests, focused on Israeli and Gulf security."

Despite the alleged use of chemical weapons by Damascus, Washington does not appear to be any closer to directly intervening in the conflict on the side of the fractious opposition.

"We're more frightened of the rebels getting their hands on these [chemical] weapons than of Assad having them, which tells you a lot about our attitude toward the rebels," Landis said of the US position.

Both Kerry and Lavrov agreed on Tuesday to revive the Geneva communique as the basis for peace negotiations between the warring parties. But how that communique can improve the situation on the ground, nearly a year after its implementation failed last June, remains unclear. The communique called for a transitional government in Syria, but remained silent on Assad's fate. 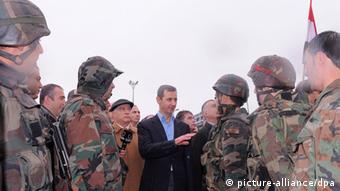 Assad has refused to step down

The US position, however, may have moved closer to Russia's stance in one important respect. Kerry maintained that he does not personally see how Assad could play a role in a political transition. But the US secretary of state also said that it's for the Syrians to decide who ultimately participates in the process, leaving open the possibility that negotiations could include Assad.

"In some ways the United States has backed down from its more hard-line position in the beginning, which was that Assad has to go," Landis said. "The Russians made it very clear, that they would not accept preconditions - that they can't tell Assad to go."

In the end, a negotiated settlement can only work if the fractious Syrian rebels and the Assad regime agree to sit at the same table. But the opposing sides are separated by two years of fighting that have left 70,000 people dead, more than 1 million living as refugees in neighboring countries, and at least another 4 million displaced inside Syria.

"I have not seen any parts of the regime, or the major elements of the opposition interested in a negotiated settlement," Hazbun said.

Israel bombed Syria and the Assad regime is threatening retaliation. The international community warns of further escalation - yet how great is the danger of a Syrian-Israeli war? (07.05.2013)

'No conclusive findings' over chemical weapon use in Syria

The UN has downplayed reports that chemical weapons may have been deployed in Syria, asserting they have no firm proof. The clarification came after a UN investigator said rebel forces may have used the nerve gas sarin. (06.05.2013)