Washington and Baghdad should not discuss troop withdrawal, the US State Department has said, refusing parliament's request for US soldiers to leave. Protesters in Iraq urged both the US and Iran to stop their meddling. 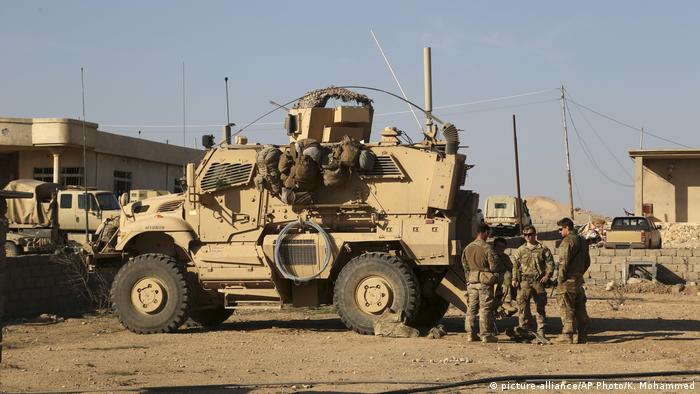 After Iraqi lawmakers voted to oust US troops, the US State Department dismissed their demand and said Washington and Baghdad should instead focus on fixing their alliance.

"Any delegation sent to Iraq would be dedicated to discussing how to best recommit to our strategic partnership — not to discuss troop withdrawal," spokeswoman Morgan Ortagus said on Friday.

The US, which invaded Iraq and toppled the regime of Saddam Hussein in 2003, currently has some 5,200 soldiers on Iraqi soil. The troops are training and assisting Iraqi forces in the fight against the remnants of the defeated "Islamic State" (IS) militia.

On Friday, the State Department said the US forces were crucial for the anti-IS effort and would not discuss removing them.

Instead, the two sides should talk about "our right, appropriate force posture in the Middle East," the US said.

The latest row between Iraq and the US was triggered by a US drone attack near Baghdad airport which killed Iran's General Qassem Soleimani and powerful Iraqi militia head Abu Mahdi al-Muhandis. In a non-binding vote on Sunday, the Iraqi parliament passed a resolution asking the US troops to leave and asking the Iraqi government to formally demand a US withdrawal.

In an apparent blunder, the US military's Task Force Iraq pledged to "prepare for onward movement" of US troops "in deference to the sovereignty of the Republic of Iraq" in a letter sent on Monday. However, the US officials were quick to dismiss the message as a "draft" that was sent by mistake. Several top US military officials have said there were no plans for US forces to withdraw.

Iraq's caretaker prime minister Adel Abdul-Mahdi then presented the request to US Secretary of State Mike Pompeo during a phone call on Thursday night.

Between rock and hard place

Also on Friday, protesters gathered in Baghdad and southern Iraq to demand that both Iran and the US stop meddling in Iraqi politics.

Both Washington and Tehran are nominally allies of the Baghdad government. Iran is ruled by Shiite clerics who also exert a large influence on the Shiite majority in Iraq. The US also has many instruments to pressure the Iraqi officials, including waivers on sanctions against Iran. Washington currently allows Iraq to import Iranian gas despite sanctions, but the arrangement is set to expire in February.

Iraq is also home to large Sunni and Kurdish populations, which oppose the idea of a US withdrawal and see US forces as a shield against unchecked power of Shiite factions.

To the point - Trump vs Iran: On the brink of War?