US Media Agency reform triggers fears for global internet freedom | World| Breaking news and perspectives from around the globe | DW | 23.06.2020

Critics fear for freedom of the press with a Trump ally now running the US Agency for Global Media. But more unsettling still may be the implications for free access to the internet around the globe. 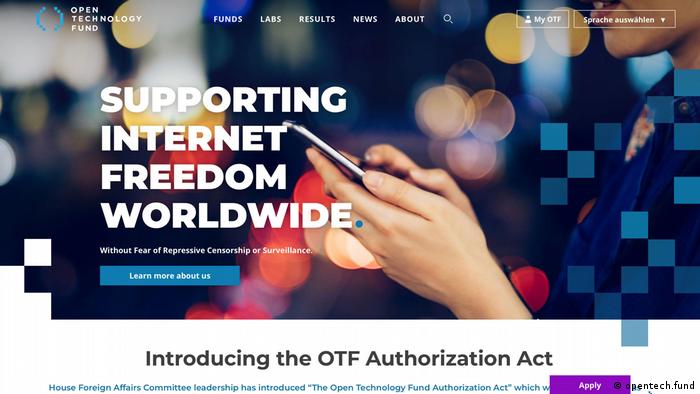 The US Agency for Global Media (USAGM) has seen upheaval since conservative film-maker Michael Pack was confirmed as its new CEO on June 4. Since taking up his post, three key leaders within the USAGM, including the head of Voice of America (VOA), have resigned.

On June 17 Pack fired the heads and advisory boards  of all four of the USAGM's remaining international broadcast agencies.

Former USAGM board members have urged the protection of all USAGM assets, calling them "a key pillar of the United States' soft power." The House Foreign Affairs Committee has ordered Pack to turn over to Congress "any and all documents" relative to the firings by June 29.

Everyone knows the VOA, few know the OTF

Much of the news has focussed around VOA, the target of presidential attacks and the most visible asset in the USAGM portfolio.

But the USAGM is about more than broadcasting to the world via VOA or Radio Free Asia (RFA) or Radio Free Europe (RFE.) The Open Technology Fund (OTF) is also part of its portfolio.

Influenced by the digital organization behind uprisings in Iran in 2009 and across the Middle East in 2010 and 2011, then US Secretary of State Hillary Clinton backed the Radio Free Asia anti-censorship project that would become the OTF.

The Open Technology Fund was established in 2012 as a grant-based program with a mission "to advance internet freedom in the world's most repressive environments to ensure that all people can safely access the uncensored internet in order to seek, receive, and impart information freely."

Read more: US sees over 400 attacks on press freedom in under a month

The OTF funds the research, development and deployment of technologies advancing that internet freedom, making available anonymizing browsers like Tor and apps that avoid online profiling and censorship, as well as offering encryption services, like Signal, for messaging.

It also claims that two-thirds of all cellphones in the world use its technologies. Germany's new coronavirus tracking app, for instance, uses it.

The fact that all OTF its code is open-source keeps it transparent and protects users' online safety, says Seamus Tuohy, director of information security at Human Rights Watch.

The rights advocacy group Digital Rights Fund, which is based in Pakistan, is one of the many groups taking to Twitter to voice support for internet freedom and call for the OTF to be protected.

Libby Liu, director of the OTF since its inception, was the first administrator to step down after Pack's appointment.

Around the time of Liu's June 13 resignation, a letter from the Lantos Foundation began to circulate. The human rights group wrote to the State Department suggesting diverting funds away from OTF's myriad peer-to-peer, privacy-first, open-source projects and investing instead in a group of four, large-scale, closed-source, anti-censorship tools. The letter promises better coordination between the government and the agency and suggests exactly how the funds could be shifted.

"The new leadership will try to change OTF's holistic and innovative approach to creating technology that can be integrated into tools people are using already," she told DW.

But critics fear that funds will be shifted away from the OTF, jeopardizing its independence. They fear a lack of oversight due to the closed-source nature of the replacement programs, and a loss of reach compared to the OTF.

Onlookers are alarmed by the potential risks this fundamental restructuring poses to the credibility of USAGM outlets.

Now the future of the OTF, and with it, internet freedom, hangs in the balance.

Open-Source Tools for a Better World

Open-Source Tools for a Better World

Correction: A previous version of this article stated that Libby Liu made public a letter from the Lantos Foundation. In fact, Liu did not herself make the letter public.