The US has admitted that a coalition airstrike may have killed scores of Syrian army soldiers amid a fragile ceasefire in Syria. Russia has demanded "full and detailed explanations" at the UN Security Council. 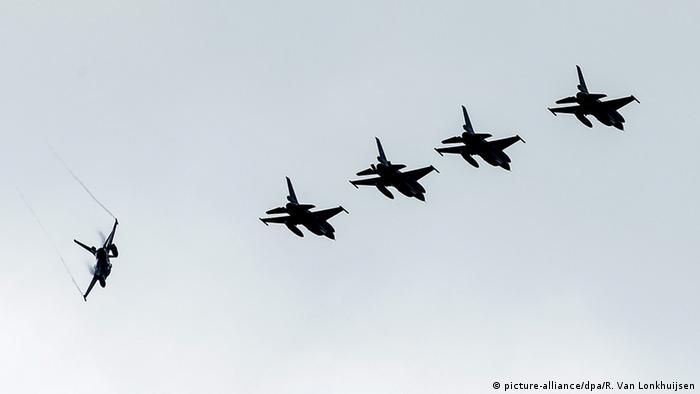 US-led coalition warplanes struck Syrian army positions on Saturday near the Deir el-Zour airport in the eastern part of the war-torn country, according to Syrian and Russian military officials, in a claim later confirmed by the United States.

The confirmation came after an earlier statement issued by the Russian army.

"Warplanes from the international anti-jihadi coalition carried out four airstrikes today against Syrian forces surrounded by the 'Islamic State' group in the Deir el-Zour air base," it said in a statement. Russia said two F-16s and A-10 jets entered Syrian airspace from Iraq.

"Sixty-two Syrian soldiers were killed and a hundred others were injured in these strikes," it added.

Russian President Vladimir Putin has accused the US of not being transparent about the Syria truce deal. Meanwhile a pro-US rebel leader says the ceasefire would not hold as Moscow continues to violate the agreement. (17.09.2016)

The US has warned Russia that potential military cooperation will not be realized unless humanitarian aid is delivered to Syria's besieged communities. The two countries had planned to meet with the UN Security Council. (17.09.2016)

The US plans to cooperate with Russia in the fight against terrorists if the ceasefire in Syria holds. But in that case, Washington would actually be helping out Syrian President Assad, warns Björn Blaschke. (13.09.2016)

Britain-based monitor Syrian Observatory for Human Rights said at least 80 Syrian army soldiers had been killed in the strikes.

A statement from the Syrian army denounced the "serious and blatant attack" that had enabled the "Islamic State" (IS) group to overrun the Syrian army positions, according to Syrian state news agency SANA.

US officials later admitted they may have accidently hit Syrian military positions while targeting the "Islamic State," but halted the attack when informed by Russia that the airstrikes may have hit the Syrian army.

"Coalition forces believed they were striking a Daesh fighting position," the Pentagon said in a statement, using another name for IS. "The coalition airstrike was halted immediately when coalition officials were informed by Russian officials that it was possible the personnel and vehicles targeted were part of the Syrian military."

"Syria is a complex situation with various military forces and militias in close proximity but coalition forces would not intentionally strike a known Syrian military unit," the statement said.

In response, Russia has called for an emergency session of the United Nations Security Council, demanding "full and detailed explanations about whether this was deliberate support of the 'Islamic State' or another mistake." The meeting was set to begin at 7:30 p.m. local time (2330 UTC) on Saturday.

The attack would mark the first time US-led coalition warplanes are known to have hit the Syrian army in nearly two years of airstrikes against IS.

It comes on the fifth day of a fragile US-Russia brokered ceasefire between Syrian regime aligned forces and various rebel factions that has largely held despite violations on both sides.

Moscow said if the airstrikes were an error, then it was a reflection of Washington's refusal to coordinate with Russia against terrorist groups in Syria.

Under the terms of the ceasefire, US and Russia are to coordinate strikes against IS and other terrorist groups - but only if the truce is successful and aid deliveries are to be allowed into besieged areas.

Aid deliveries have been unable to enter parts of rebel-held Aleppo, a key part of the deal for the opposition.

The Syrian army has been fighting IS since last year near Deir el-Zour. It controls the airport and pockets of the city but is otherwise surrounded by IS.

Putin: US facing problems in Syria

The airstrikes come as Russia accuses the United States of failing to control rebel groups tied to "terrorist elements," in particular the Fatah al-Sham Front, previously known as al-Nusra Front, which was aligned with al-Qaeda.

Fatah al-Sham Front fights in the same area and cooperates with some rebel factions the US considers moderate, but have been reluctant to break with one of the strongest fighting forces on the ground.

On Saturday, Russian President Vladimir Putin questioned why the United States did not want to release a document of the ceasefire, which led to the abrupt cancelation of a UN Security Council meeting on the matter on Friday.

"This comes from the problems the US is facing on the Syrian track - they still cannot separate the so-called healthy parts of the opposition from the half-criminal and terrorist elements," Putin said.