President Donald Trump has called the new set of sanctions the "largest ever" targeting North Korea. The move comes as Trump's daughter Ivanka is in South Korea for the end of the Winter Olympics. 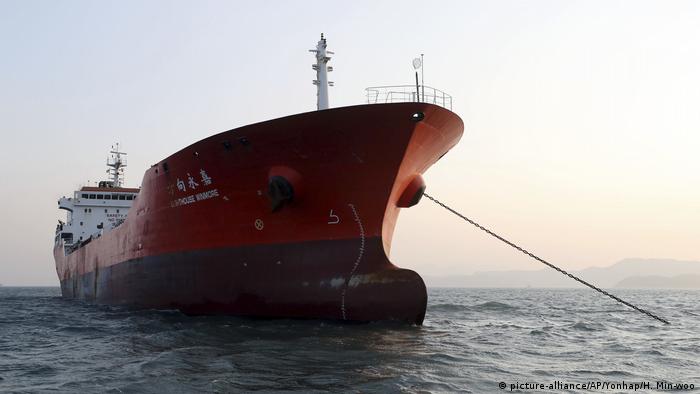 The US Treasury Department announced a new raft of sanctions on Friday in an attempt to target entities linked to North Korea's shipping and trade sectors.

The latest sanctions are directed at one person, 27 shipping companies and 28 vessels, according to a statement posted by the Treasury's Office of Foreign Assets Control (OFAC).

The sanctioned entities include companies with headquarters in North Korea, as well as ones based out of other countries, including China.

US officials told the Reuters news agency that Washington had been speaking to partners in the Asia-Pacific region, such as Japan, South Korean and Singapore, over how to crack down on ships suspected of violating sanctions on the North.

The plan could see US Coast Guard ships deployed in the region to stop and search vessels.

South Korea welcomed the new round of sanctions.

"New US sanctions will alert those who are illegally trading with North Korea and therefore bolster the international community to carry out resolutions from the UN Security Council," the South Korean Foreign Ministry said.

US President Donald Trump, who said the measures were "the heaviest sanctions ever imposed on a country," appeared to threaten military action against North Korea if the sanctions failed.

"If the sanctions don't work, we'll have to go phase two," Trump said. Without elaborating further, he added: "Phase two may be a very rough thing, may be very, very unfortunate for the world."

The UN Security Council has imposed three sets of sanctions on North Korea in the last year in order to deprive the reclusive state of funds for its nuclear and ballistic missile programs.

The most significant recent international round of sanctions (despite Trump's "largest ever" claims on Friday) targeted supplies of oil in particular, although shipping companies were suspected of helping Pyongyang defy the limitations. Oil is a particularly precious commodity in a country without a reliable electricity grid, with rural businesses often reliant on generators for power.

The latest US sanctions come just days before the closing ceremony of the Pyeongchang Winter Olympics in South Korea, with North Korean officials set to attend.

Trump said she would use her presence at the end of the Olympics to emphasize the US commitment to a "maximum pressure campaign to ensure that the Korean Peninsula is denuclearized."

In a possible attempt to reassure Washington, Moon said that South Korea was the "last" country that would be willing to acknowledge North Korea as a nuclear state. He added that any talks about improving relations between the two countries must also include talks on nuclear disarmament.

Moon praised the Winter Olympics for helping to open up dialogue between the countries, which are still technically at war.

"North Korea's participation in the Winter Olympic Games has served as an opportunity for us to engage in active discussions between the two Koreas and this has led to lowering of tensions on the peninsula and an improvement in inter-Korean relations," Moon said.

South Korea's Presidential Blue House said that there were no official opportunities for the US and North Korean officials to meet, suggesting that a run-in between Pyongyang's delegation and Ivanka Trump was unlikely.