The president said climate change posed an "existential threat" to humanity. Biden added the US will host a summit on April 22, where it is likely to strengthen its carbon reduction commitments under the Paris agreement. 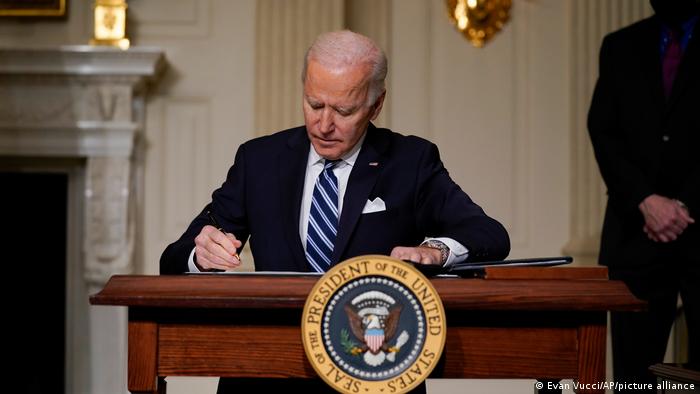 Biden said the US had to play a leading role in the fight against climate change, in stark contrast to his predecessor

US President Joe Biden on Wednesday signed a series of orders aimed at quelling rising global temperatures and announced that the United States will host a climate summit in April.

The recently inaugurated president said the US had to take a leading role in the fight against climate change.

Biden, who signed an executive order on his first day in office to have the US rejoin the Paris climate agreement, has appointed several environmental experts to key roles within his administration, such as former secretary of state John Kerry as his special climate envoy, a position that now holds a seat on the National Security Council.

"We must lead the global response, because neither challenge can be met, as Secretary Kerry has pointed out many times, by the United States alone."

Biden had made tackling the climate crisis a key part of his presidential bid, and on Wednesday repeatedly called it an "existential threat," as well as an opportunity for the economy to grow. The policy is in stark contrast to his predecessor.

"In my view, we've already waited too long to deal with this climate crisis. We can't wait any longer. We see it with our own eyes. We feel it. We know it in our bones. And it's time to act," he said.

The actions establish climate change as a major national security and foreign policy issue for the White House, and will commit the country to conserving at least 30% of federal lands by 2030.

Biden also said the United States will host a climate assembly on April 22 where it is expected to strengthen its carbon reduction pledges under the Paris Agreement on climate change, where the goal is to limit global warming to to 1.5 degrees Celsius.

But the president said the US would not ban fracking, which has meant the country has become the world's top producer of natural gas and is seen by policy experts as a transition energy, despite its harmful impacts.