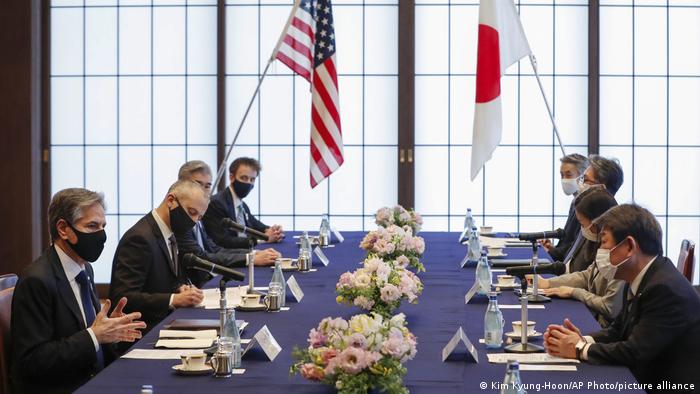 US Secretary of State Anthony Blinken and US Secretary of Defense Lloyd Austin held talks with Japanese Foreign Minister Toshimitsu Motegi and Defence Minister Nobuo Kishi in Tokyo on Tuesday, as the US kicks off a week of meetings with Asian allies.

The first overseas trip by top members of US President Joe Biden's cabinet heading to Asia has been seen as a reaffirmation of US commitments to "Indo Pacific" allies facing challenges ranging from a more-aggressive China to a nuclear-armed North Korea.

What was said about China?

"The United States and Japan acknowledged that China's behavior, where inconsistent with the existing international order, presents political, economic, military and technological challenges," the ministers said in a joint statement.

"The ministers are committed to opposing coercion and destabilizing behavior towards others in the region," they added.

China and Japan are at loggerheads over competing claims to islets in the East China Sea, called Senkaku in Japan, and Diaoyu in China.

"The United States and Japan remain opposed to any unilateral action that seeks to change the status quo or to undermine Japan's administration of these islands," the four ministers said in a joint statement.

The ministers also spoke about China's "coercion and aggression" to "systematically erode autonomy in Hong Kong, undercut democracy in Taiwan and abuse human rights in Xinjiang and Tibet,"  Blinken told a press conference following the meeting.

What was said about Myanmar?

"The military is attempting to overturn the results of a democratic election and is brutally repressing peaceful protesters," Blinken said.

Dozens have been killed in Myanmar's protests as daily demonstrations grow against the military coup that ousted Aung San Suu Kyi's government on February 1.

What about North Korea?

The ministers' joint statement renewed calls for the "complete denuclearization" of North Korea, and said it is one of the key areas of cooperation between the Washington and Tokyo.

Blinken said the US was still reviewing its policy towards North Korea, and "whether various additional pressure measures could be effective, whether there are diplomatic paths that make sense."

The comments come a day after Kim Yo Jong, the sister of the North Korean dictator, warned Washington against  "causing a stink"and criticized the US and South Korea for continuing to hold joint military exercises.

On Wednesday, Blinken and Lloyd will head to Seoul for discussions with South Korean officials on Biden's North Korea policy.

Washington also aims to strike new agreements with Japan and South Korea on sharing costs for stationing US troops.

On his way back to Washington, Blinken will stop over in Anchorage, Alaska for a meeting with China's
highest-ranking foreign policy official, Yang Jiechi.

Austin plans to travel from South Korea to New Delhi for talks with Indian leaders.

The US said the sanctions were a response to China's increased naval activity in the region. The move comes just days before Joe Biden is set to take over as US president.

US slaps export sanctions on Myanmar after protest deaths

The new measures come as YouTube announced that it would remove five military-run channels. The platform said it would ban all pages linked to Myanmar's army, amid reports of online threats and misinformation.