US issues warrant for Iranian oil tanker in Gibraltar

The US Justice Department has issued a federal warrant for the seizure of Grace 1, the Iranian oil tanker that was detained in Gibraltar. The US has said the vessel and the oil aboard are subject to forfeiture. 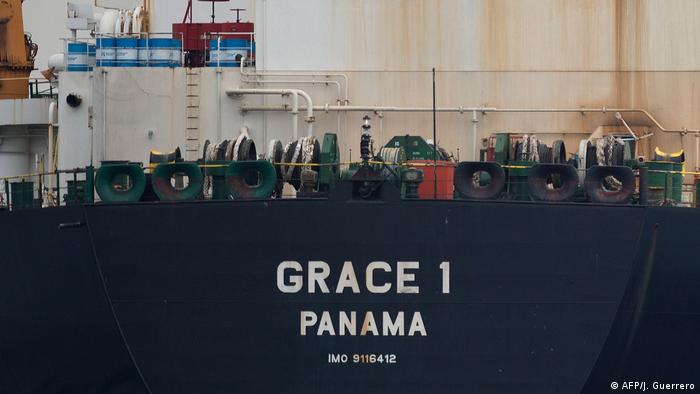 The US Justice Department issued a federal warrant on Friday for the seizure of Grace 1, the Iranian oil supertanker. The move comes just a day after a Gibraltar judge had allowed the release of the detained vessel despite US legal attempts to withhold it.

The vessel was detained in Gibraltar by the British Royal Marines on July 4 on suspicion of violating EU sanctions by shipping oil to Syria, an ally of Iran.

The US Justice Department stated that the move is based on violations of the International Emergency Economic Powers Act (IEEPA), and bank fraud, money laundering, and terrorism forfeiture statutes.

Astralship, the vessel's shipping agent, said the ship could be sailing away within the next "24 to 38 hours," once new crews dispatched to the territory take over command.

"The vessel is ongoing some logistical changes and requirements that have delayed the departure," Richard De la Rosa, managing director of Astralship, told the Associated Press.

The warrant for seizure was issued by the US District Court for the District of Columbia and addressed to "the United States Marshal's Service and/or any other duly authorized law enforcement officer."

The US government says that the vessel, including the two million barrels of oil aboard and a sum of $995,000, are subject to forfeiture.

Washington had attempted to withhold the vessel on the basis that it allegedly had ties to Iran's Islamic Revolutionary Guard Corps (IRGC), which the US has designated a terrorist organization.

Jessie Liu, the US Attorney for the District of Columbia, said in a news release that "the scheme involves multiple parties affiliated with the IRGC and furthered by the deceptive voyages of the Grace 1."

The release also mentioned that the seizure warrant and forfeiture complaint "are merely allegations" and that the "burden to prove forfeitability in a civil forfeiture proceeding is upon the government."

The tanker moved its position on Friday but its anchor was still down off Gibraltar and it remains uncertain if it was ready to set sail anytime soon.

UK says Iran tanker will be freed, unless it goes to Syria

The UK has told Iran that an Iranian tanker seized by British forces off the coast of Gibraltar last week would be released, so long as it did not go to Syria. Iran has pledged to continue oil exports. (13.07.2019)

In a provocative tweet, the US president described retaliation that would mark "the official end of Iran." Iran has remained defiant, saying "genocidal taunts" would not be enough to destroy the country. (19.05.2019)

US asks Gibraltar to halt release of Iranian tanker

Media in Gibraltar report that the US Department of Justice has requested a halt to the release of Grace 1, an Iranian tanker held on suspicion of shipping oil to Syria. The United States submitted a list of allegations. (15.08.2019)