The decision to release an Iranian oil tanker seized by Britain off Gibraltar last month comes despite US pleas. The ship was suspected of violating European Union sanctions on oil shipments to Syria. 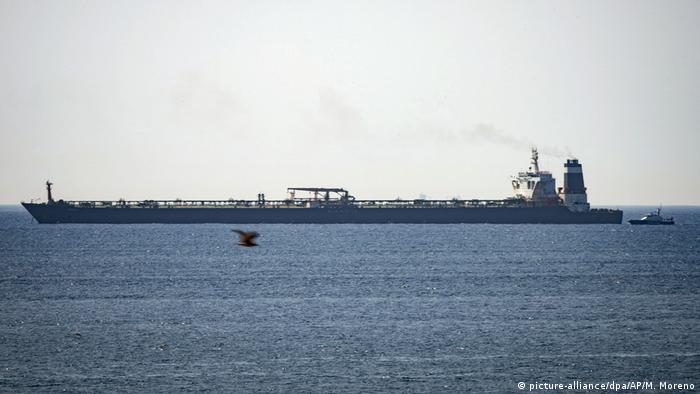 Gibraltar on Thursday released the Iranian oil tanker Grace 1, despite a last-minute effort by the United States to block the move.

The US had sought to seize the supertanker through legal action.

Gibraltar's Supreme Court had delayed its decision to release the ship after the US State Department requested a halt to the release of the tanker, which was held on suspicion of violating EU sanctions by shipping oil to Syria.

The Gibraltar Chronicle newspaper, quoting the court's chief justice, Anthony Dudley, said there was no US application before the country's Supreme Court when it resumed hearings on Thursday afternoon.

According to the newspaper, Chief Justice Dudley said that since Iran had guaranteed in writing that the Grace 1 "was never destined to an EU sanctioned entity ... there are no longer reasonable grounds to suspect that the detention of the Vessel is required."

The Iranian ambassador to the UK confirmed that the Grace 1 would leave Gibraltar soon. Hamid Baeidinejad said the US was "desperately" trying to block the release but faced a "miserable defeat."

The captain of the vessel and three officers have been formally released, a Gibraltan government spokesperson said earlier on Thursday.

Gibraltar is a British overseas territory linked by a narrow stretch of land to southern Spain.

Read more: UK says Iran tanker will be freed, unless it goes to Syria

On July 4, British Royal Marine commandos led an operation to seize the tanker on suspicion that it was violating EU sanctions on shipping oil to Syria. The seizure of the supertanker, which was carrying 2.1 million barrels of Iranian oil, also heightened international tensions in the Persian Gulf.

Most of the crew members were Indian and Pakistani nationals. Iranian officials demanded the immediate release of the tanker on July 5. In a statement, the Foreign Ministry described the UK government's capturing of the ship as "unacceptable" .

Later in July, Iran seized two vessels in the Strait of Hormuz, one sailing under a British flag and the other bearing the banner of Liberia. "These seizures are unacceptable," former British Foreign Secretary Jeremy Hunt said at the time, before warning of "serious consequences" if the issue was not resolved quickly. Iran is still holding the British-flagged ship.

The US request on Thursday is a potential hindrance to a swapping of the vessels, though no such agreement had been formally reached. Had the US not intervened, Chief Justice Dudley said, "the ship would have sailed."

In a statement, Britain's Foreign Office announced that "investigations conducted around the Grace 1 are a matter for the government of Gibraltar."

Iran has tried to intercept a British oil tanker, forcing a Royal Navy warship to intervene, the UK said. Meanwhile, the captain of an Iranian tanker seized off British territory Gibraltar last week has been arrested. (11.07.2019)