US asks Gibraltar to halt release of Iranian tanker

Media in Gibraltar report that the US Department of Justice has requested a halt to the release of Grace 1, an Iranian tanker held on suspicion of shipping oil to Syria. The United States submitted a list of allegations. 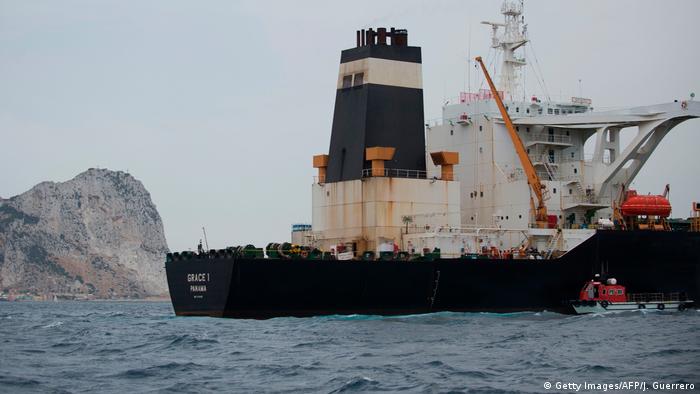 The United States requested that Gibraltar halt the release of a detained Iranian tanker on Thursday and turn the vessel over to US officials.

"The US Department of Justice has applied to seize the Grace 1 on a number of allegations which are now being considered," the government of the British overseas territory announced in a statement released Thursday.

The Gibraltar Chronicle reports that the last-minute request, from the US Department of Justice, has prompted the British territory's Supreme Court to hold off on an official decision on the tanker until later in the day. Further details about the US allegations were not immediately available.

The captain of the vessel and three officers have been formally released, a Gibraltar government spokesperson said.

On July 4, British Royal Marine commandos  led an operation to seize the tanker  on suspicion that it was violating EU sanctions on shipping oil to Syria. The seizure of the supertanker, which was carrying 2.1 million barrels of Iranian oil, also heightened international tensions in the Persian Gulf.

Most of the crew were Indian and Pakistani nationals. Iranian officials demanded the immediate release of the tanker on July 5. The Foreign Ministry described the UK government's capturing of the ship as "unacceptable" in a statement.

Later in July, Iran seized two vessels in the Strait of Hormuz, one sailing under a British flag and the other bearing the banner of Liberia. "These seizures are unacceptable," former British Foreign Secretary Jeremy Hunt said at the time, before warning of "serious consequences" if the issue was not resolved quickly. Iran is still holding the ship.

The US's request on Thursday is a potential hindrance to a swapping of the vessels, though no such agreement had been formally reached. Had the United States not intervened, Gibraltar Chief Justice Anthony Dudley said, "the ship would have sailed."

In a statement, Britain's Foreign Office announced that "investigations conducted around the Grace 1 are a matter for the government of Gibraltar."

Britain says it will join a US-led mission to protect merchant vessels in the Strait of Hormuz. Germany has rejected joining the mission, which comes amid heightened tensions between Iran and the West. (05.08.2019)

The British government has said it will create a new mission with European allies amid rising tensions with Iran in the Strait of Hormuz. The foreign secretary said Britain "will always defend" freedom of navigation. (22.07.2019)