US issues first passport listing ′Israel′ as place of birth for Jerusalem-born citizen | News and current affairs from Germany and around the world | DW | 30.10.2020 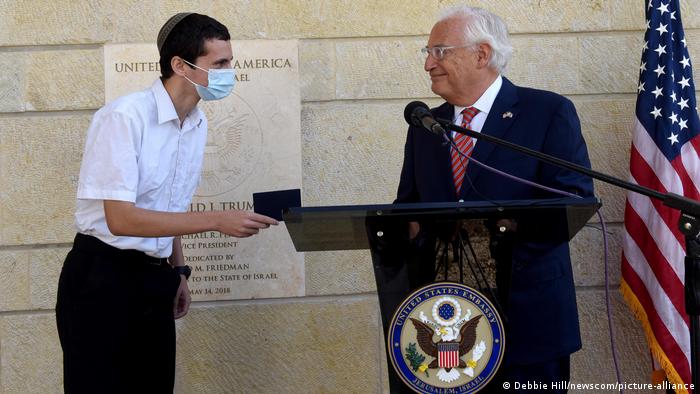 US Ambassador to Israel David Friedman on Friday issued the first ever US passport to list "Israel" as place of birth for a US citizen born in Jerusalem. The move is a major deviation from established US policy — which since 1948 has only listed "Jerusalem" as place of birth for US citizens born in the city, refusing to recognize any country's sovereignty over it.

Read more: Opinion: An anniversary, an embassy, and the destructive power of Donald Trump

Friedman presented 18-year-old Menachem Zivitofsky with the passport during a ceremony at the US Embassy. "I'm humbled and honored to receive this passport," said Zivitofsky. During the ceremony, Friedman told the young man, "Today, you have a nation of birth, the state of Israel."

Zivotofsky's parents first filed a lawsuit for the right to list his birthplace as Israel in 2003, when he was an infant. But the US Supreme Court struck down a law that would have made that possible in 2015.

Abbas: 'Jerusalem is not for sale'

Timing is no coincidence

US Secretary of State Mike Pompeo announced the policy change on Thursday and the State Department later confirmed that Jerusalem-born US citizens would have the option of listing either Jerusalem or Israel as their place of birth in passports in the future.

The move, like many by US President Donald Trump vis-a-vis Israel — recognition of Jerusalem as the capital of the state of Israel, moving the US Embassy to Jerusalem, or recognizing Israeli sovereignty over the Golan Heights — has drawn praise and criticism.

The move could help Trump fire up his evangelical Christian base before they head to the polls on Tuesday. Most in this group list US policy toward Israel as their most important concern, alongside abortion legislation and religious liberty.

Some evangelicals also see Trump's recognition of Jerusalem as the capital of Israel as a sign that God is using him to fulfill Bible prophecies, taking the world closer to the "end times" and the "Second Coming" of Jesus. Speaking of dramatic US policy changes while visiting Israel earlier this year, Secretary of State Pompeo — himself an evangelical Christian — said, "I am confident the Lord is at work here."

At a campaign rally in Oshkosh, Wisconsin, this August, Trump said: "We moved the capital of Israel to Jerusalem — that's for the evangelicals. You know it's amazing, the evangelicals are more excited by that than the Jewish people."

The new passport policy also triggered harsh criticism. Hanan Ashrawi, a senior Palestinian official, called it an "attempt to erase Palestinians." In a statement delivered Friday, she said, "The US State Department's new decision to allow the labeling of Jerusalem as part of Israel in official US documents is a falsification of the city's history and identity."

A spokesperson for Palestinian President Mahmoud Abbas — who hopes to realize the dream of creating a Palestinian state in the West Bank and Gaza with East Jerusalem as its capital — said the US passport policy change was a violation of international law, noting that efforts by Trump "to impose facts on the ground in a race against time ahead of the US election will not alter that reality."

Israel occupied East Jerusalem during the Six Day War in 1967 and annexed it in 1980. The United Nations does not recognize that annexation nor does most of the international community, which instead list Jerusalem as "undefined" on official documents.