US-India relations tense as Pompeo meets Modi in New Delhi | Asia| An in-depth look at news from across the continent | DW | 26.06.2019

The US and India are trying to deepen their ties in the face of multiple security challenges in the "Indo-Pacific" region. But New Delhi faces the tough task of balancing India's security and economic interests. 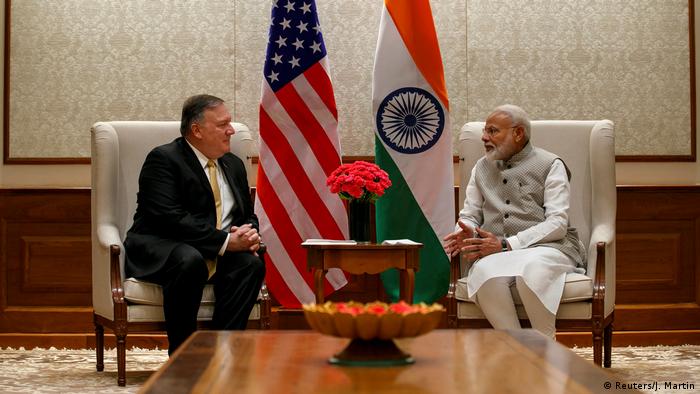 After impromptu stops in Saudi Arabia, the United Arab Emirates and Afghanistan, US Secretary of State Mike Pompeo arrived in New Delhi on Tuesday evening. As the stops in the Middle East were added, a stop in Sri Lanka was dropped from Pompeo's itinerary. However, keeping schedule with India indicates the importance of ties with New Delhi for long-term US strategy in Asia.

Washington sees India as a key player in the US' strategy in the so-called "Indo Pacific" — a mega region that the US military conceives of as spanning the Pacific and Indian Oceans, from the west coast of the United States to the western shores of India.

Pompeo's trip to Asia and the Middle East had originally been conceived as a tour to promote the "shared goal of a free and open Indo-Pacific region," before the threat of conflict with Iran took immediate diplomatic precedence.

Earlier in June, during the Shangri-La Dialogue in Singapore, the US released its "Indo-Pacific Strategy Report." The US Defense Department labelled the Indo-Pacific as its "priority theater," where Washington sees its most critical geopolitical and economic contests playing out in the future. 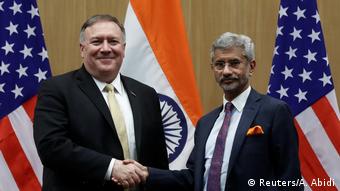 The US says it faces a "great power competition" with China in a region that has seen Beijing's economic and military clout expand dramatically over the past decade, be it through its Belt and Road Initiative (BRI) or a massive naval build-up in the South China Sea.

To compete against China, experts say the US needs strong partnerships and alliances with major Asian countries.

India and the US vs. China?

A geopolitically assertive India as a regional and democratic counterweight to China's ambition fits well with US strategy, which Washington has called a "geopolitical competition between free and repressive visions of world order."

After Modi's party won the elections in May, the US State Department said the victory would provide an excellent opportunity to implement a vision for a "strong and prosperous India that plays a leading role on the global stage."

These include ensuring freedom of navigation in the South China Sea and criticizing China's lack of transparency in financing infrastructure projects with BRI countries.

"India must be comforted by the fact that the US has somewhat increased its actions to counter China's destabilizing influence across the Indo-Pacific," Richard Rossow, a senior adviser on US-India policy at the Center for International and Strategic Studies (CSIS), told DW. "Most of Asia had been waiting for the US to push back harder against China's increased assertiveness."

Tensions in the relationship

However, the US-India strategic relationship risks being strained by Washington cracking down on what it considers unfair trade practices — President Donald Trump has called India the "tariff king."

On May 31, the US announced it was ending India's preferential trade status, a move that put duties on around $6 billion worth of Indian exports to the US. New Delhi responded by hiking up duties on 28 products imported from the US, including almonds, apples and walnuts.

"The barrage of actions from Washington against any nation with which the United States has a trade deficit has caused consternation in New Delhi,  even if India helped trigger this trade fight by imposing new trade barriers of its own," said Rossow.

The US has been irked over the past year by what it sees as increasing hurdles for American companies operating in India. New Delhi's new rules in areas such as e-commerce and data localization have angered Washington and hit firms such as Amazon, Walmart, Mastercard and Visa.

Rising friction between the US and Iran have also affected relations with India, whose economy is heavily reliant on crude imports. India imports more than three-quarters of the oil it consumes. New Delhi was hoping that it would receive an extension of US sanctions waivers allowing India to buy Iranian oil. But Washington ended these waivers in May. The US also imposed sanctions Venezuela, another top Indian supplier.

Washington's pressure on trade and energy comes at a time when it wants to have New Delhi as a strategic partner on its side. "The actual role the US sees for India is still evolving," said Rossow. "The US has long hoped India would become a more active player in Southeast Asia as China attempts to supplant the US-led system of rules and order."

In 2018, the US and India set up a ministerial-level dialogue, called the 2+2, which provides a forum for high-level security talks between both countries.

On the defense side, India's continued purchases of Russian military equipment are a major bone of contention between New Delhi and Washington. Russia has traditionally been India's top arms supplier. And despite the threat of US sanctions, India is planning to go ahead with its $5.2-billion purchase of the S-400 missile defense system from Russia.

"Some US policy shifts have bewildered and troubled New Delhi," said Rossow. "A more aggressive American approach to nations buying energy and defense equipment from Russia comes at a time India is looking to import multiple key military systems from Russia."

In a commentary published by the National Bureau of Asian Research, a US think tank, analysts said that India is hesitant to commit to a full military alliance with the US, which would require binding responses to specific events, whereas strategic partnerships involve a much lower level of commitment.

"The fact that the Indo-US relationship is a strategic partnership means its contours are rife with ambiguity, which has resulted in differing expectations from the two sides."

"The US must revisit its Indo-Pacific strategy somewhat, and determine ways we can support India's steps to become a security provider in its own region. That's likely the key to increased security cooperation," said Rossow.

The US State Department has said religious intolerance in India is growing under PM Modi's right-wing government. India said that a foreign government had "no right" to comment on the country's internal affairs. (25.06.2019)

Indian Prime Minister Narendra Modi has been reelected with an even bigger mandate than in 2014. Should China and Pakistan be worried about the future of relations with India under an emboldened Modi? (24.05.2019)

Prime Minister Narendra Modi's BJP has won India's general election. While financial markets have reacted positively, many are worried about the rise of nationalism and the future of India's democracy. (23.05.2019)

Can India overcome its social divide?