Indian religious minorities face increased violence under Modi — report | Asia| An in-depth look at news from across the continent | DW | 25.06.2019

The US State Department has said religious intolerance in India is growing under PM Modi's right-wing government. India said that a foreign government had "no right" to comment on the country's internal affairs. 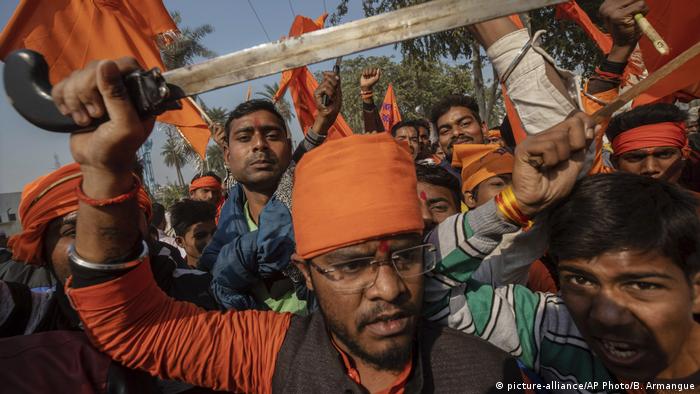 A 10-minute-long video of a brutal lynching that emerged recently on Indian social media has shocked Indian Muslims. The footage shows a group of men beating a 22-year-old Muslim man, Tabrez Ansari, in the eastern state of Jharkhand. The crowd forced him to shout "Jai Shri Ram" (Hail Lord Ram) — a slogan widely used by Hindu hard-liners — as he was tied to a pole and then severely beaten for an alleged burglary.

Ansari died at the hospital on Saturday, the same day the US State Department released its international religious freedom report, which paints a dark picture of the situation for religious minorities in India.

"There were reports of religiously motivated killings, assaults, riots, discrimination, vandalism, and actions restricting the right of individuals to practice their religious beliefs," the report said. "Authorities often failed to prosecute perpetrators of 'cow vigilante' attacks, which included killings, mob violence, and intimidation."

The Indian Ministry of External Affairs rejected the US report, saying a foreign government had no right to pronounce on the state of Indian citizens' constitutionally protected rights.

"India is proud of its secular credentials, and its status as the largest democracy and a pluralistic society with a longstanding commitment to tolerance and inclusion," Raveesh Kumar, a foreign ministry spokesperson, said in a statement.

US Secretary of State Mike Pompeo is in New Delhi this week for talks with Indian Prime Minister Narendra Modi, although human rights issues do not appear to be on the agenda at this point.

However, many Indians feel that the overwhelming mandate won by Modi's nationalist Bharatiya Janata Party (BJP) in last month's general elections has damaged the state of Indian secularism and emboldened those carrying out hate crimes against minority religions.

Muslims, in particular, are often the target of religious animosity. Muslims make up nearly 14% of India's 1.3 billion people. Extreme Hindu groups have also targeted Dalits, the "untouchables" in the caste system, and Christians, whose churches have been vandalized in Delhi and the central state of Madhya Pradesh.

There have been at least five violent incidents since the BJP's election victory in May. In at least four different cases, victims were targeted for reasons as varied as possessing beef, protesting against caste-based discrimination or simply being Muslim. In a fifth incident, a school teacher in Jharkhand was arrested for a two-year-old Facebook post defending the right of Adivasi communities to eat beef.

And shortly after the brutal beating of Tabrez Ansari in Jharkhand, a teacher at a Muslim seminary in Kolkata, was allegedly pushed off a moving train for refusing to chant Hindu slogans.

World's largest religious festival to kick off in India

World's largest religious festival to kick off in India

India's Muslims are concerned that they are being systematically targeted. Syeda Hameed, an educator and former member of India's planning commission, told DW that she felt Indian Muslims are in for a very difficult time.

"Indian Muslims are currently facing one of the most trying moments in our history," she said.

A Muslim member of parliament, Asaduddin Owaisi, spoke to DW about the brutal beating of the Muslim man in Jharkhand.

"There has been not one word from the prime minister or the home minister, Amit Shah, about this horrific incident in Jharkhand," he said. "Why this silence? These incidents are not going to stop."

Apart from the US report, reports by the Mumbai-based Centre for Study of Society and Secularism and the UK-based Minority Rights Group International both indicate that minority groups in India are increasingly encountering hate crimes, such as lynching, threats, attacks on places of worship and forced conversion.

Social activist Shabnam Hashmi pointed out that Modi had reiterated his commitment to protecting minorities during a post-election victory speech.

"Unless the political leadership acts and shows that Muslims and Dalits are safe and will be protected, there is no meaning in paying lip service," Hashmi told DW, adding that there seems to be a "discernible pattern" in attacks against Muslims.