Police say a man suspected of smuggling cows has been killed by a mob in northwestern India. Attacks by so-called "cow vigilantes" targeting minorities have become a growing problem in the Hindu-majority country. 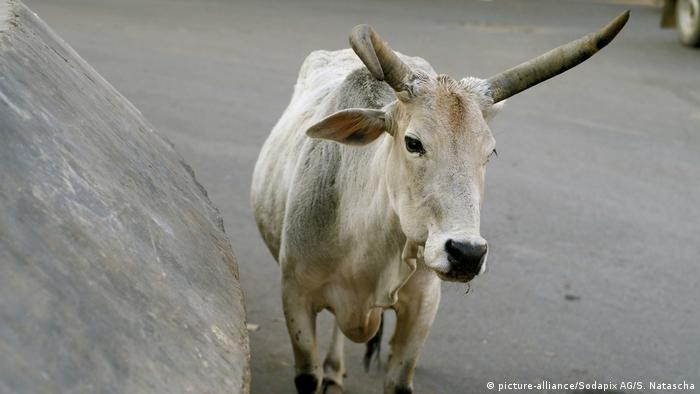 Villagers in the northwestern state of Rajasthan beat a Muslim man to death after accusing him of smuggling cows destined for slaughter, police said Saturday.

Senior officer Anil Beniwal said the mob ambushed the 28-year-old and another man, who were transporting cows through a forested area in the Alwar district, and then began beating them with sticks.

"The police reached the scene to find the victim, Akbar Khan, lying in the mud, severely wounded," he said.

The man died on the way to hospital, but his companion managed to flee. Police said it wasn't clear whether the men were actually smuggling cows.

Authorities have identified five suspects behind the attack and "will arrest them soon," Beniwal said.

The rise of 'cow vigilantes'

Rajasthan's chief minister, Vasundhara Raje, condemned the incident on Twitter, saying that the "strictest possible action shall be taken against the perpetrators."

There has been a recent wave of vigilante killings in India, with hard-line Hindu groups often targeting individuals accused of eating beef or slaughtering cattle. At least 20 people, most of them Muslims or low-caste Dalits, have been killed in mob attacks over the past few weeks.

The rise in violence prompted the country's highest court this week to urge the government to enact new laws against mob killings.

The Supreme Court said that "horrendous acts of mobocracy" cannot be allowed to become a new norm. It proposed a string of measures, including specific punishments for cow vigilante lynchings, the creation of fast-track courts to hear cases of mob violence, and compensation schemes for victims.

Cows are considered sacred in Hindu-majority India and slaughtering the animals is illegal in several states, including Rajasthan.

Tensions between Muslims and Hindus in India