At least 25 people have been killed since May in incidents of mob violence triggered by rumors circulated on WhatsApp. The authorities do not know who is behind the hoax messages. 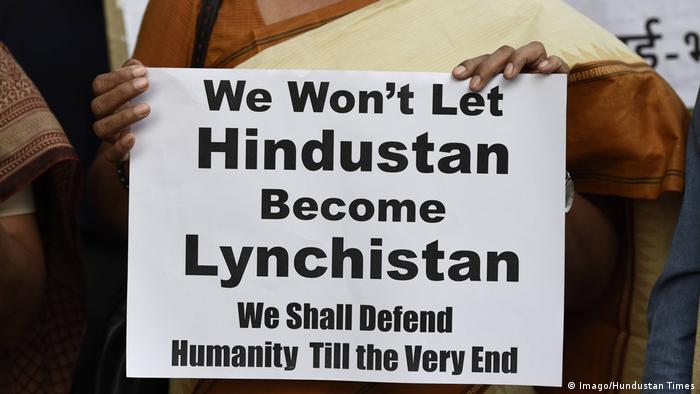 A 32-year-old engineer was beaten to death and three others were severely injured in the southern Indian state of Karnataka on Friday in the latest incident of mob violence fueled by fake social media messages.

The victims were assaulted after one of them reportedly offered imported chocolates to school children, according to local media reports. The assailants assumed the group were trying to kidnap the children — the attack bore terrifying similarity to a string of mob lynchings in recent weeks.

Since May, at least 25 people have become victims of vigilante justice triggered by fake warnings of kidnappers or organ harvesters circulated on the Facebook-owned messaging platform WhatsApp.

The perpetrators in most cases are villagers, many of them first-time smartphone users unable to discern between real and fake videos sent via the platform.

An explosion in smartphone use is widely regarded as a major cause of the problem.

Nearly one in three Indians own a smartphone. Last year, 134 million smartphones were sold in India, which is the world's second-biggest market after China.

Earlier this month, a mob killed five men in the western state of Maharashtra after videos circulated on WhatsApp warning about the presence of organ harvesters. The videos were fake, with one showing children who died from a nerve-gas attack in Syria.

On July 6, the army had to be called in the eastern state of Assam to rescue three priests who were under attack from a mob, incensed by hoax messages about child kidnappers carried on WhatsApp.

In June, two young men were lynched in the state on similar suspicions.

Alarmed by the string of lynchings, the Electronics and Information Technology Ministry has called on WhatsApp to remain "accountable, responsible and vigilant" and act immediately to curb the spread of false information.

"WhatsApp needs to recognize India offers a huge market for them. They are making good money out of India operations," Information Technology Minister Ravi Shankar Prasad said earlier this month. "Therefore, they must focus on the security-related aspects of people of India." 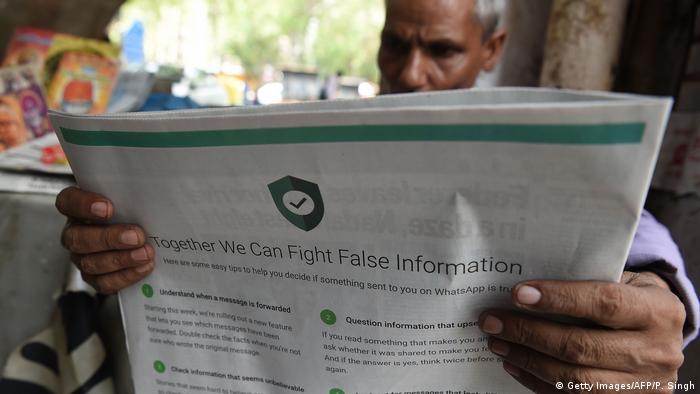 Earlier this week, WhatsApp, which counts India as its biggest market, with more than 200 million users, published full-page advertisements in leading newspapers offering tips to users on how to identify false information.

"We are starting an education campaign in India on how to spot fake news and rumors," a WhatsApp spokesman said in a statement. "Our first step is placing newspaper advertisements in English and Hindi and several other languages. We will build on these efforts."

WhatsApp also launched a new feature that will label forwarded messages as such, informing receivers that the sender is not the creator of the message.

"It's a good beginning," Altaf Halde, cybersecurity global business head at the cybersecurity consulting firm Network Intelligence, told DW. "We need a mix of technology and people awareness to deal with the problem. More education is needed, but it will not happen overnight."

Unlike its parent company, Facebook, messages on WhatsApp are difficult to monitor, as they are encrypted. This makes it hard for law enforcement agencies to trace the creators of the false content.

Tagging forwarded messages with the originating number is not an option, experts warn.

Saket Modi also feels awareness is key as the majority of WhatsApp users in the country are first-time smartphone users.

Critics of Indian Prime Minister Narendra Modi say his recent policies are forcing Hindu values on the rest of the country. Now Bollywood actor Shah Rukh Khan has waded into the online debate over religious intolerance. (04.11.2015)

India's reputation as an open seat of learning under threat