Attacks on Africans expose India′s racist inclinations | Asia| An in-depth look at news from across the continent | DW | 30.03.2017

The recent attacks on Africans have raised concerns about the safety of foreigners in India and an alarming trend of hate crimes and racism in the country. What does it mean for India's pluralistic ethos? 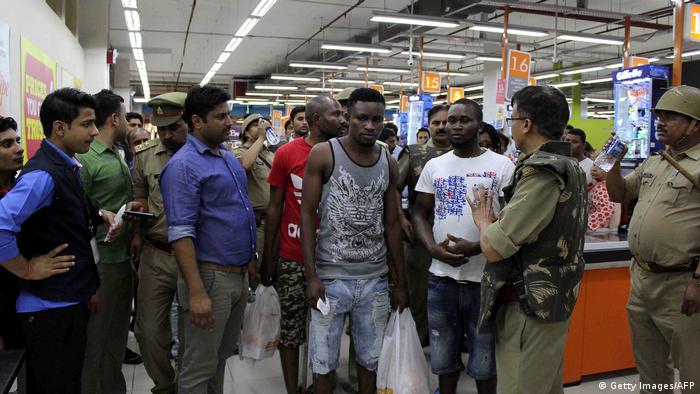 On Monday, March 27, hundreds of people in New Delhi went on a mob rampage and attacked several African students. The violence was sparked by allegations that five African students were involved in the drug trade and the overdose death of a young Indian boy. Police arrested the five but then released them citing a lack of evidence.

It was not the first time that Africans living India have faced brutal attacks. Experts say these incidents reflect on the growing xenophobia and a deep-rooted racism in Indian society against "dark-skinned" people.

Last year, a Congolese man was beaten to death in Delhi. Prior to that, a Tanzanian woman was attacked in the southern city of Bangalore. In 2015, six Africans were beaten up by a mob in New Delhi.

Precious Amalawa and his younger brother Endurance, who are from Nigeria and study at the Noida International University, are still in a state of shock after being attacked by a 100-strong mob at a public mall.

"I thought I was going to die. The mob was uncontrollable and it's a miracle we are alive. Obviously, our families want us to come back to Nigeria," Precious Amalawa told DW.

His younger brother Endurance is also traumatized by the experience. "How can we live peacefully now? The fear of being attacked will always lurk. It is frightening," he said.

The violence has forced the Africans living in the Indian capital and adjoining areas to stay indoors and not venture out for their own safety.

While many people in India condemned the violence, many social media users justified the attacks and hurled racist slurs against the Africans. Some even accused them of "cannibalism" and "drug racketeering."

"India prides itself for being a democratic, multicultural and law-abiding country, but the racist attacks on Africans tell a different story," Pamela Philipose, a columnist and researcher at the Indian Council of Social Science Research, told DW.

Philipose maintains that unless the Indian government acts decisively against those targeting Africans in the country, the attacks won't stop.

An estimated 40,000 Nigerians live in India. According to government data, they make up the fifth-largest group of foreign students in India - only one place behind Sudanese students. Most of these Nigerian students choose to live in big cities and constitute a significant chunk of India's medical tourists. They have often complained of facing racist taunts on the streets.

Suhas Chakma, director of the New-Delhi based Asian Center for Human Rights, believes the "prejudice" against Africans is linked to India's caste-based system.

"Let us admit that we are a racist country. The government is doing nothing to provide a sense of security not only to Africans but to all foreigners. The country immediately needs an anti-racism law," Chakma told DW.

Need for an anti-racism law

The racist attacks are not restricted to Africans; even the students from India's northeastern region complain that they are being discriminated against because of their "Chinese looks."

"We face racism because we look different. I can relate to my African colleagues. The parliament needs to pass an anti-racism law," Alana Golmei, an Indian student from the northeastern region, told DW.

The authorities have promised to curb the "hate crime." The police have registered cases against some 600 people for Monday's rioting and booked 44 people for an attempt to murder. But the African community in India is unsatisfied.

Samuel Abiye Jack, president of the Association of African Students in India, said the African people living in India are "tired of the government's promises."

"We will organize a nationwide protest. We will also tell African students not to come to India to pursue higher education," Jack told DW.

The African governments have repeatedly condemned the attacks on their students in India and have demanded New Delhi to take measures to protect them. The latest mob rampage is likely to sour India's diplomatic ties with African nations even further.