Washington accuses New Delhi of deploying a wide range of trade barriers that negatively affect US commerce. Media reports say that India could impose higher import duties on US goods in response to Trump's latest move. 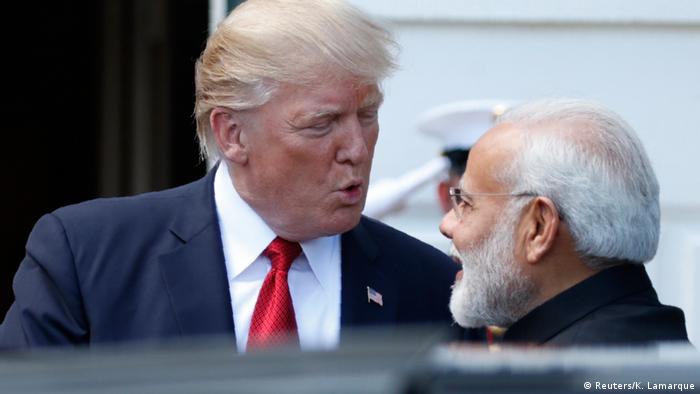 India will lose its trade privileges with the US as a beneficiary of the Generalized System of Preferences (GSP) next Wednesday, US President Donald Trump announced Friday.

"I have determined that India has not assured the United States that it will provide equitable and reasonable access to its markets," Trump said.

"Accordingly, it is appropriate to terminate India's designation as a beneficiary developing country effective June 5, 2019," the statement added.

The GSP program was introduced more than 40 years ago, in 1976, to promote economic growth in developing countries, allowing the export of certain products from these nations to the US duty free.

The Indian government dubbed Trump's move "unfortunate" but said that it will continue to seek to build strong economic ties with Washington.

"India, like the US and other nations, shall always uphold its national interest in these matters," the government said in a statement on Saturday. New Delhi said that it viewed the issue as part of its ongoing economic relationship with the US and "will continue to build on our strong ties with the US, both economic and people-to-people."

"We are confident that the two nations will continue to work together intensively for further growing these ties in a mutually beneficial manner," it added.

Removing a country from the GSP requires 60 days' notice, and it appears that President Trump waited until after India's mammoth elections before completing the move.

Indian media reports said New Delhi was considering higher import duties on more than 20 US goods, including agricultural produce and chemicals, in response.

Washington's GSP program allows $5.6 billion (€4.94 billion) worth of Indian exports to enter the US duty free.

An Indian official cited by Reuters in March said that the "actual benefit" from the program to the Indian economy was only $250 million per year.

"GSP is more symbolic of the strategic relationship, not in value terms," the official said.

US trade officials, however, accuse New Delhi of deploying "a wide array of trade barriers that create serious negative effects on US commerce." US authorities said their country's trade deficit with India reached $27.3 billion in 2017.

In February, India started enforcing new rules on e-commerce in an attempt to shield domestic traders from foreign-based business giants. The rules caused severe disruption for Amazon and Flipkart, which is majority-owned by the US retail giant Walmart.

Last year, New Delhi ordered Visa and Mastercard to store their data on transactions involving users in India solely on Indian servers. US firms have opposed such legislation in various parts of the world. India also increased tariffs on electronics and smartphones. Previously, the Trump administration imposed tariffs of 25% on steel and 10% on aluminum imported from India.

New Delhi and Washington are also at odds over Iranian oil imports. In April, the US announced it would not extend sanction exemptions to countries importing oil from Iran when they expired in early May. It meant countries and companies trading with Iran without Washington's consent would risk US sanctions and getting cut off from the American financial system.

India is one of the countries likely to be the hardest hit by the US decision. India is the world's third-biggest oil consumer, but its energy needs are primarily met through imports. The South Asian nation imports almost 80% of its oil requirements and Iran is its third-largest supplier, contributing over 11% of its crude oil demand. In the fiscal year 2018-19, India imported about 23.5 million tons of Iranian oil.

Following the US decision, India may try to increase its supplies of oil from countries like Saudi Arabia and the United Arab Emirates. Indian refiners are increasing their planned purchases from the nations of the Organization of the Petroleum Exporting Countries (OPEC), Mexico and the United States, to hedge against the loss of Iranian oil.

Official figures released on Friday showed that India's growth slowed for the third straight quarter, to 5.8% in January-March, while unemployment hit a 45-year high last year.

India and Russia have announced a major arms deal, violating US sanctions. Energy sector sources also say New Delhi will purchase 9 million barrels of Iranian oil. Both moves will test India's relations with the US. (05.10.2018)

Israel has signed a free trade deal with the United Arab Emirates, its first such agreement with an Arab country.