Nearly half of the 680 people detained in the largest US immigration raid in a decade have been released pending deportation trials. Teachers have described the devastation of children left home alone after the raids. 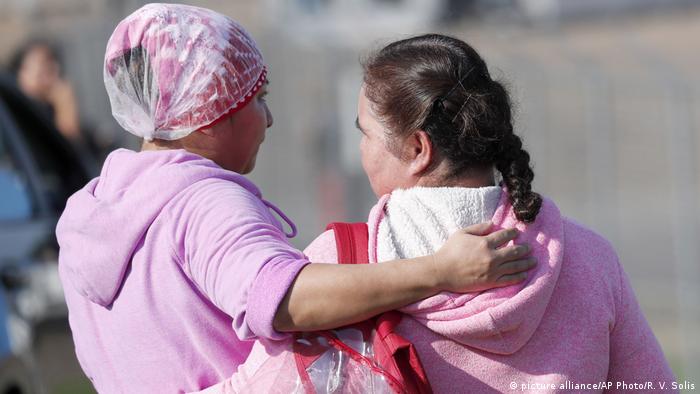 US border protection authorities released 300 migrants from detention on Thursday, one day after the country's largest immigration raid in a decade. The raids against some 680 immigrants in Mississippi left many children at home with no parents.

Immigration and Customs Enforcement (ICE) spokesman Bryan Cox did not provide an explanation for why some people were released and others were not, though he did mention "humanitarian factors" in a statement sent via email to the press.

"They were placed into proceedings before the federal immigration courts and will have their day in court at a later date," Cox wrote.

The raids on Wednesday were mostly focused on factories and food plants in rural Mississippi. Koch Foods, many of whose employees were caught up in the raids, issued a statement saying that all employees are verified through a government database to ensure that they have residency permits.

A resident of Morton, where the Koch Foods plant was located, said it was "devastating" to see what the authorities‘ actions did to the immigrants' children. "It was very devastating to see all those kids crying, having seen their parents for the last time," said Gabriela Rosales.

"I need my dad and mommy," 11-year-old Magdalena Gomez Gregorio told local television channel WJTV. "My dad didn't do anything, he's not a criminal."

Many political leaders publicly called out the timing, scale and harshness of the raids, particularly coming on the heels of the mass shooting in El Paso targeted at Hispanic immigrants. Senator Elizabeth Warren tweeted: "Just days after the massacre in El Paso, fueled by anti-immigrant rhetoric, the Trump administration carried out the largest ICE raid in more than 10 years—separating families and targeting communities of color."

Former US Representative from Texas Beto O'Rourke, a vocal critic of the Trump administration's immigration policies, tweeted: "These children will go to sleep tonight with no idea when, or if, they'll see their parents again. This is being done in our name—and it's on all of us to end it."

In response to criticism of the harshness of the raids, especially their effect on vulnerable children, US Attorney for southern Mississippi Mike Hurst said that immigrants " have to follow our laws, they have to abide by our rules, they have to come here legally or they shouldn't come here at all."

A school superintendent for Scott Country said that more than 150 students were absent from school on Thursday, out of fear of being detained.

Tony McGee described seeing the children's devastation on Wednesday had been for many teachers "by far the worst day they ever spent as an educator."

US immigration authorities have launched a series of small-scale raids targeting undocumented families. But many municipal officials have refused to support the action, with New York's mayor calling it "unsuccessful." (14.07.2019)

Report: US to target 2,000 migrant families on Sunday

Officials have told US media that a major operation to arrest thousands of illegal immigrants is coming. The Trump administration has asked for an even harder crackdown than the Department of Homeland Security requested. (21.06.2019)