The deal may see citizens of Honduras and El Salvador forced to apply for asylum in Guatemala. In the US, the Supreme Court has given President Trump the green light to redirect funds to build part of his border wall. 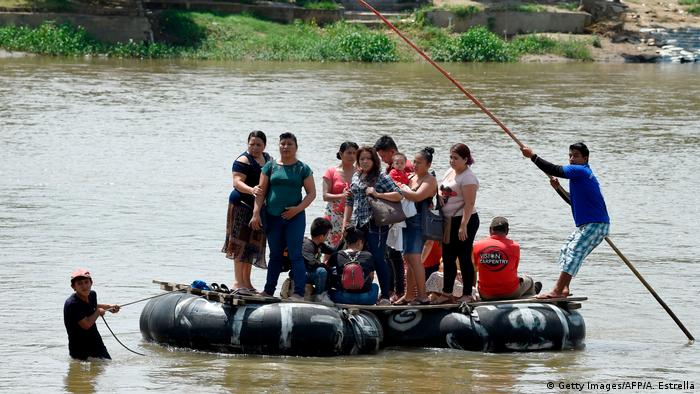 The so-called "safe third country" agreement would require citizens of Honduras and El Salvador who enter Guatemala to apply for asylum there instead of at the US southern border, where an influx of Central American migrants has made it difficult for Trump to fulfill an election pledge to curb immigration.

Neither Guatemala nor the Trump administration have provided concrete details of the migration deal.

The concept of "safe third country" is a term used to describe the resettlement of refugees in a third country that has agreed to admit them and grant them permanent residence. It was unclear to what degree the agreement signed Friday prevents migrants from applying for asylum in the United States from Guatemala.

Trump said the agreement would protect "the rights of those with legitimate claims," while ending the "abuse" of the asylum system and ease a crisis at the overwhelmed US southern border.

Acting Homeland Security Secretary Kevin McAleenan told reporters the deal aimed to protect asylum-seekers from traffickers and other harms, but seemed to imply such migrants would need to stay in Guatemala.

"If you have a Honduran family or an El Salvadoran national, instead of them having to pay a smuggler, come all the way to our border to seek asylum, when they arrive in Guatemala they're in a country that has a fair proceeding for assessing asylum claims and that's where they should make that claim," McAleenan said.

In a six-paragraph statement on Twitter, the government of Guatemala made no mention of a "safe third country" agreement, instead referring to it as a "Cooperation Agreement for the Assessment of Protection Requests." The statement said the deal would last for two years, and its implementation would be reviewed every three months. The accord would not apply to Guatemalan citizens or nationals who are seeking asylum, the government said.

The two countries have been trying to negotiate a migration deal for months, and on Wednesday Trump threatened to impose tariffs and other economic measures against Guatemala if it did not cooperate.

The Guatemalan statement said the goal of signing the deal was "to counter serious economic and social repercussions" stemming from the US threats.

It is unclear how Guatemala intends to implement the pact. The country's Constitutional Court has issued three injunctions preventing the Guatemalan president from signing the deal without the approval of congress.

The agreement signed Friday comes after Mexico and the United States reached another deal six weeks ago to address the dire humanitarian situation at the border.

Separately on Friday, the US Supreme Court in a 5-4 vote ruled that the Trump administration can redirect $2.5 billion (€2.2 billion) in Pentagon funds to help build part of a wall along the US-Mexico border, even through Congress has not allocated funding for the project.

"Wow! Big VICTORY on the Wall," Trump tweeted in response to the ruling. "Big WIN for Border Security and the Rule of Law!"

Trump declared a national emergency earlier this year after Congress gave him only a portion of the $5.7 billion he requested for a border wall, and then sought to take money from the Pentagon and other government accounts to build the wall that he says is needed to stop immigration along the border with Mexico.

Lower courts had then frozen the funds, pending the outcome of lawsuits filed by the American Civil Liberties Union on behalf of the Sierra Club and Southern Border Communities Coalition, which said the national emergency declaration was unconstitutional.

US aid to Honduras, Guatemala and El Salvador funded programs that addressed the causes of mass migration to the US. President Donald Trump accused the Central American nations of "not doing enough." (01.04.2019)

Mexico says US-border crossings down by 30%