US aid to Honduras, Guatemala and El Salvador funded programs that addressed the causes of mass migration to the US. President Donald Trump accused the Central American nations of "not doing enough." 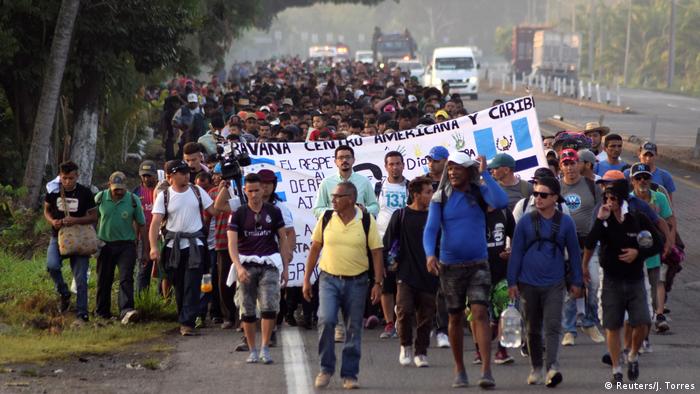 The White House on Sunday doubled down on President Donald Trump's decision to cut off aid to Honduras, Guatemala and El Salvador, saying the small Central American nations were not doing enough to stop the flow of migrants to the US.

The White House reignited the issue of immigration this week, amid a surge in migrant detentions and the possibility of a second migrant caravan headed north from Central America. Trump confirmed the suspension of aid payments to the three countries on Friday.

"We stopped payment to Honduras, to Guatemala, and to El Salvador. We were paying them tremendous amounts of money, and we're not paying them anymore because they haven't done a thing for us," Trump said.

The aid to Central American countries is meant to fund programs to combat gangs and foster development, and to address the root causes of mass migration from the region to the US.

In an appearance for television broadcaster CNN on Sunday, White House chief of staff Mick Mulvaney questioned the efficacy of the aid program.

"If it's working so well, why are the people still coming?  Why are these historic numbers — again, 100,000 people will cross the border this month alone," Mulvaney said.

"It's not working well enough to help us solve our border crisis.  And that's what the president's focused on," he concluded.

Critics have warned that cuts to US assistance could worsen conditions and possibly increase the migrant flow.

Democratic Senator Dick Durbin defended the aid's impact and its goal. "We need to focus on what's happening in Central America where three countries are disassembling before our eyes and people are desperately coming to the United States," he said.

"The president cutting off aid to these countries will not solve this problem," Durbin added.

Honduras responded on Sunday to the White House plan, proposing that Guatemala and El Salvador consider supporting joint initiatives "to ensure the sovereignty and dignity of each nation" in light of "the contradictory policies of the United States."

Trump said on Friday that he was willing to close the 2,000-mile (3,200-km) southern border this week, if Mexico did not stop the flow of people.

In a tweet on Sunday, the US president blamed Democrats for what he called "a ridiculous asylum system and major loopholes to remain as a mainstay of our immigration system."

Critics noted that a border closure would also be counterproductive, as closing points of entry would have a negative impact on trade and commercial ties between Mexico and the US.

Anti-corruption outsider Nayib Bukele has won El Salvador's presidential election. His win will bring an end to decades of a two-party system. (04.02.2019)

A number of migrants from Central America have died after the truck they were traveling in swerved off the highway in southern Mexico. Migrants regularly use the route on the way to the USA. (08.03.2019)