Coronavirus pandemic has many down and out in Los Angeles

Because the United States lacks a solid social welfare system, many Americans live hand to mouth — especially in times of national crisis. Now, more and more people are depending on food donations to keep hunger at bay. 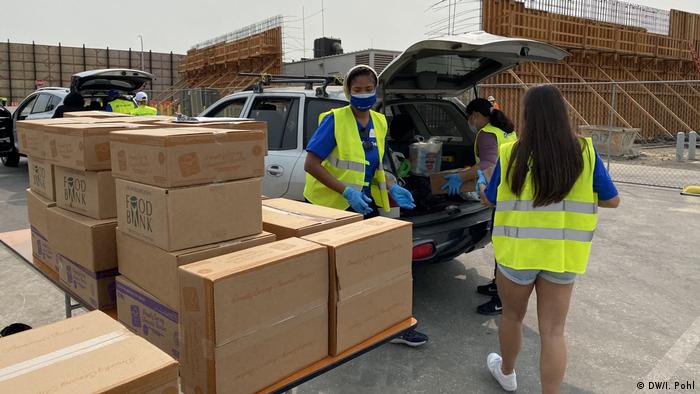 Built for over $5 billion (€4.2 billion) in just under four years, the SoFi football Stadium with its giant dome could be mistaken for a spaceship that has landed in a massive parking lot. It fits Los Angeles, which for decades has been synonymous with Hollywood: the center of the film industry, the place where movies are made that transport audiences out of this world.

In the parking lot of the stadium, workers in yellow vests bustle about, giving it a feel of pre-pandemic busyness. But it is busy because of the pandemic: Cardboard boxes fill the parking lot — and there are long lines of cars  with their trunks open, waiting to be loaded.

Thirty-eight-year-old Maria Rojas sat behind the steering wheel of a silver Hyundai that has seen better days. It was her first time using a food bank, and she said she felt a little ashamed. "Sometimes I must cry at night because my children went to bed with hunger in their stomach," she said.

Rojas had worked as a hairdresser, her husband as a repairman. They had been relatively financially stable with their five kids, who received meals at school, as well. Then, in March, everything changed. Los Angeles shut down, tourists stayed away, restaurants closed their doors.

More and more people lost their jobs. They could no longer afford to go to the hairdresser, and they either dealt with household repairs themselves or not all. Rojas and her family saw their income suddenly dry up; the closing of schools meant another meal to provide for their children.

The only thing that has remained constant in the state of California is the outrageously high cost of housing — though rents are down overall during the pandemic, decreases generally apply to new contracts, and the prices are still higher than many can afford in the current economy.

Though Congress voted in March to distribute stimulus checks worth $1,200 per adult and $500 per child to most US citizens and permanent residents who make less than $75,000 annually, the funds were only initially distributed to families who had filed tax returns for 2018 or 2019, which Rojas and her family had not.

The federal government has also provided additional unemployment relief, but Maria said she and her husband did not understand how to fill out the many application forms, so they simply gave up.

Each car lined up in the SoFi Stadium parking lot received four boxes containing cheese, rice, pasta, beans, canned food and frozen meat  — a total of 80 pounds (36 kilograms) of food. The distribution process had been organized with military-style precision.

Workers, clearly experienced, made sure cars continued to move forward quickly and trunks were opened. Volunteers loaded the boxes into a vehicle, and then the next car rolled up. Everything took place without direct, potentially dangerous personal contact; the risk of coronavirus transmission must be kept as low as possible here.

It took three hours to distribute 9,000 boxes. According to the  the Los Angeles Regional Food Bank, that is enough food to feed 2,300 families for two weeks. 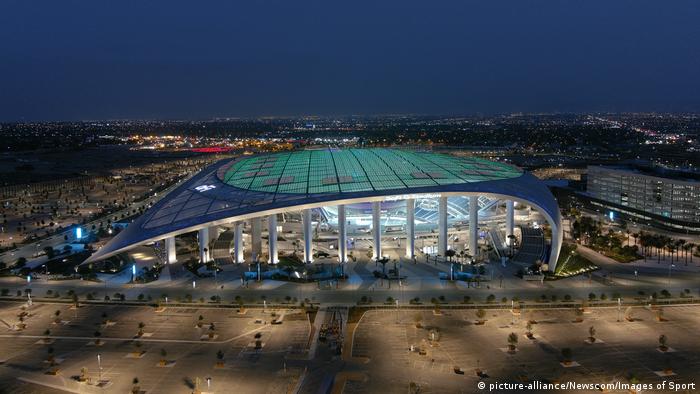 According to a poll released on Wednesday by National Public Radio (NPR), 56% of households in Los Angeles, a city of just under 4 million people and the heart of a metropolitan area of over 13 million, have experienced serious financial problems during the pandemic. "The number of people who are hungry and call for help has increased immensely," said Michael Flood, president and CEO of the Los Angeles Regional Food Bank. He said such distribution efforts were a common form of disaster relief in the United States.

Read more: What are the steps to a coronavirus vaccine?

Flood said the US Department of Agriculture had acted quickly to buy food that would otherwise have rotted from farmers when their normal clients, such as restaurants and schools, suddenly simultaneously shut. " We help to redistribute these food items," he said, " and we buy more food with donations to our organization." 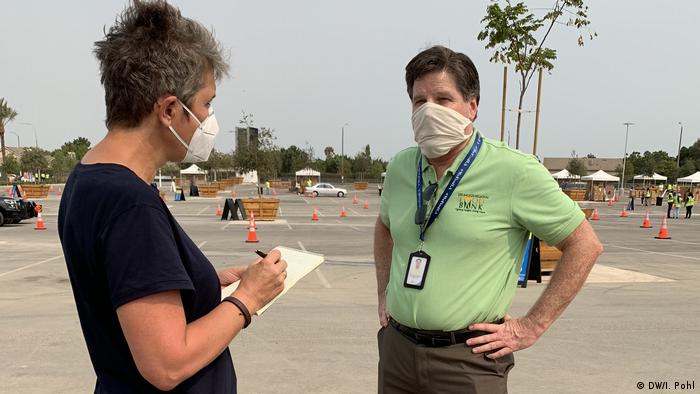 The current economic situation in Los Angeles is worse than at any time since the Great Depression, Flood said: "Unfortunately, we don't have the social security system you have in Europe," Flood said.

Read more: The pandemic is far from over

Before the pandemic, the Los Angeles Regional Food Bank, with the support of other organizations, provided groceries to about 300,000 people a month. The number is now 900,000.

"We don't think that it is getting better very fast," Flood said. " And, who knows, maybe it will even get far worse."