US intelligence has claimed it has evidence of a planned Russian military offensive in Ukraine. US President Joe Biden and Russian President Vladimir Putin are set to hold a video call.

Russia-Ukraine: Biden warns Putin that US will make advances 'very difficult' for Moscow

US intelligence officials claimed on Friday that Russia is planning a military offensive against Ukraine that could begin as early as 2022, as reported by US media outlets including the Washington Post and the Associated Press.

An anonymous US administration official told the Washington Post that said this would supposedly involve an estimated 175,000 Russian military personnel.

A US intelligence document obtained by the Washington Post showed apparent evidence of Russian forces massing in four locations and the arrival of tanks and artillery.

The document claims that the current number of Russian troops near the Ukrainian border is 94,000 and predicts that this will rise to 175,000. The document also shows apparent movement of Russian troops to and from the border, which it argues are to "obfuscate intentions and create uncertainty."

US President Joe Biden and Russian President Vladimir Putin are set to talk about the situation in an online meeting on Tuesday, sources confirmed Saturday. 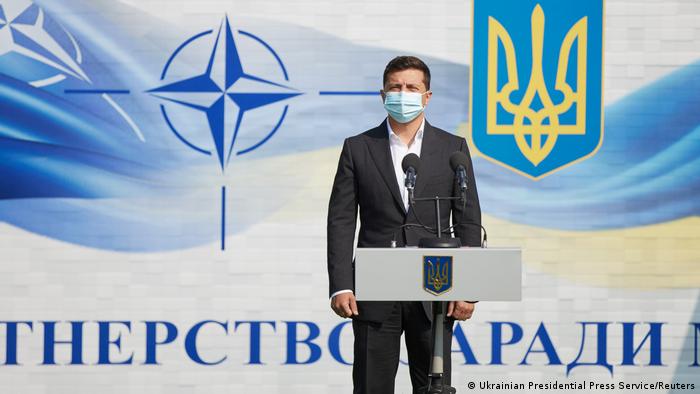 NATO has not set a timeline for Ukrainian membership

What is the Russian position?

Konstantin Kosachev, deputy speaker of the Russian parliament's upper house, denied that any attack was being planned. "There is no preparation underway for an offensive," Kosachev told Russian TV channel Russia-24.

Russian foreign policy advisor Yuri Ushakov said that President Vladimir Putin will reiterate Russia's "red lines" in negotiations, including demands for a legally binding guarantee that NATO will not expand into Ukraine. NATO has not set a timeline for Ukrainian membership in the alliance.

NATO Secretary General Jens Stoltenberg said that Russia has no say in whether Ukraine will join the alliance, and the US has threatened increased sanctions in the event Russia invades Ukraine.

How likely is an invasion?

Ukraine's Defense Minister Oleksii Reznikov told parliament that preparations could be underway for some form of escalation as soon as January.

"Our intelligence service analyzes all scenarios, including the worst ones. It notes that a probability of a large-scale escalation on the part of Russia exists. The most probable time when [Russia] will be ready for the escalation is the end of January," Reznikov said.

Russia and Ukraine have been in conflict since Russia annexed Crimea in 2014 and gave support to a separatist insurgency in Ukraine's eastern industrial region, Donbas. More than 14,000 people have died in the conflict, according to the Associated Press.

Earlier this week, Latvia's defense minister, Artis Pabriks, told DW he "shares the concerns" of the US and other NATO allies over a possible Russian invasion of Ukraine.

"We can expect any type of challenge. And we know that Russian political elite is not afraid to use military force when it decides it is to today for purposes," he said.

Russia-Ukraine: Biden warns Putin that US will make advances 'very difficult' for Moscow