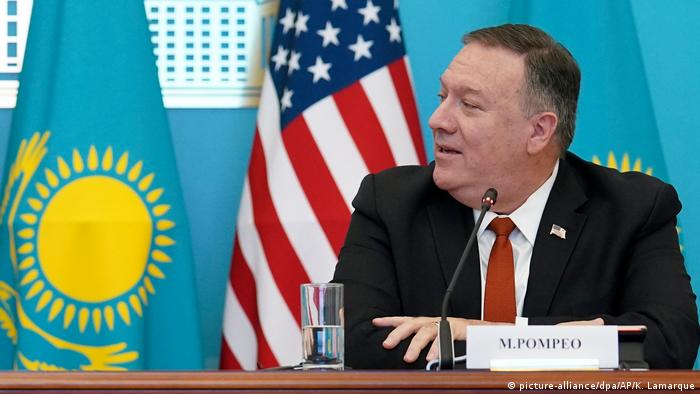 US Secretary of State Mike Pompeo visited Kazakhstan on Sunday, where he called on Central Asian countries to offer asylum to ethnic minorities fleeing persecution in China.

China's troubled Xinjiang region, where more than a million ethnic Uighurs, Kazakhs and other minorities are believed to have been incarcerated, borders Kazakhstan, Kyrgyzstan and Tajikistan.

"We discussed trafficking in persons and the plight of more than 1 million Uighur Muslims and ethnic Kazakhs that the Chinese Communist Party has detained in Xinjiang, just across the Kazakh border," Pompeo said during a press conference with Kazakh Foreign Minister Mukhtar Tleuberdi.

"We ask simply for them to provide safe refuge and asylum for those seeking to flee China ... Protect human dignity, just do what is right."

Kazakhstan has granted refuge to several ethnic Kazakhs with Chinese citizenship who fled Xinjiang, but it has not yet given any of them asylum. Local activists attributed the state's reluctance to Chinese pressure.

Kazakhstan, a former Soviet republic, still has close ties to Russia. Moscow has retained military bases and heads security and trade blocs that have fostered the relationship.

But Central Asian nations have been increasingly looking east to China and its trillion-dollar Belt and Road global trade program, to help their strained economies

Ahead of the visit, Pompeo stressed that the Central Asian countries "want to be sovereign and independent," adding that Washington had "an important opportunity to help them achieve that."

Read more: Kazakhstan will continue to 'tiptoe' around China

In the Kazakh capital, Nur-Sultan, Pompeo sought to position the US as a strong business partner.

"We fully support Kazakhstan's freedom to choose to do business with whichever country it wants, but I am confident that countries get the best outcomes when they partner with American companies,'' he said.

"You get fair deals. You get job creation. You get transparency in contracts. You get companies that care about the environment and you get an unsurpassed commitment to quality work.''

Pompeo also touted US efforts to help Kazakhstan shield itself against the coronavirus outbreak, which originated in China, and praised the country's "quick action."

More than 40 people in Kazakhstan who returned from China with flu-like symptoms were hospitalized, though no cases of the virus have been confirmed yet.

Pompeo will continue his Central Asian tour in Uzbekistan, to meet with President Shavkat Mirziyoyev, who has recently sought to reform the country's political institutions, while welcoming tourism and investment in a once-isolated republic.

On Monday, Pompeo will gather the foreign ministers from all five ex-Soviet Central Asian countries — Kazakhstan, Kyrgyzstan, Tajikistan, Turkmenistan and Uzbekistan – for talks in the Uzbek capital, Tashkent.

Kazakhstan: Plane with nearly 100 people on board crashes

A plane carrying 93 passengers and five crew members has crashed near Almaty in southeastern Kazakhstan. Dozens of people have survived the crash with injuries. (27.12.2019)

The presence of long-time leader Nursultan Nazarbayev looms large over elections in Kazakhstan, as his handpicked successor admitted Nazarbayev still exerted power. Some 500 people were detained for protesting. (09.06.2019)

From surveillance to outright threats, Tajik authorities are making life difficult for the families of political activists who have fled abroad. DW spoke with victims from a state that allows little room for dissent. (13.07.2019)