The presence of long-time leader Nursultan Nazarbayev looms large over elections in Kazakhstan, as his handpicked successor admitted Nazarbayev still exerted power. Some 500 people were detained for protesting. 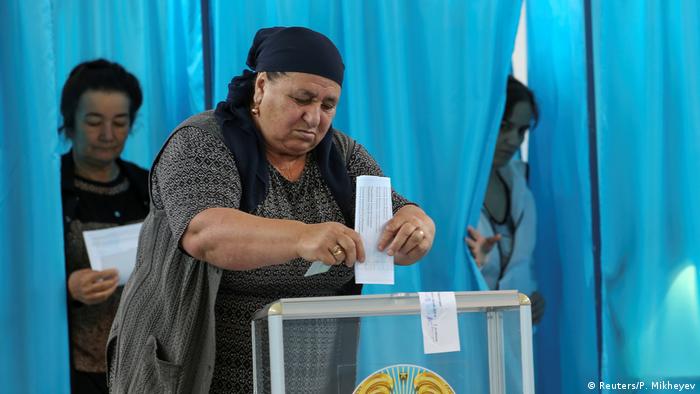 Police in Kazakhstan clamped down on unauthorized protests, detaining about 500 people as the country went to the polls on Sunday.

"There were attempts to organize illegal demonstrations and disturb the peace in the cities of Almaty and Nur-Sultan," a senior Interior Ministry official said in comments carried by state news agency Kazinform. Three police officers were reportedly injured.

Protesters called for boycotting the presidential election, which they believe serves to keep long-reigning Nursultan Nazarbayev in power from behind the scenes.

The country's interim president, 66-year-old Kassym-Jomart Tokayev, is expected to win over his six little-known rivals on Sunday.

Strongman Nazarbayev backed oil-rich Tokayev as his sucessor while
announcing his own departure in March. But the 78-year-old Nazarbayev, who holds the official title of Yelbasy, or national leader, and continues to run the ruling Nur Otan party, remains the power behind the throne.

After voting early on Sunday morning, former prime minister and foreign minister Tokayev told reporters, in English, that Nazarbayev "was still in power in the capacity of chairman of the security council ... and other capacities."

Activists have risked imprisonment protesting the poll in a country where demonstrations are all but outlawed.

Asya Tulesova was detained for two weeks after unfurling a banner during a rally. "We see that rallies are formally permitted but in reality [prohibited]," she said.

"The internet is often blocked. So citizens have no ability to express their opinion other than through creative actions," she added.

No Kazakh vote has yet been recognized as fully democratic by the Organisation for Security and Cooperation in Europe (OSCE), which has sent more than 300 observers to monitor Sunday's election.

Kazakhstan is a member of the Eurasian Economic Union (EAEU), a free-trade bloc that also includes Russia and Belarus.

Historic Kazakhstan election sparks hope for a taste of democracy

There is a sense of excitement about the presidential election — the first without longtime President Nursultan Nazarbayev. But the opposition fears nothing will change just yet. Emily Sherwin reports from Kazakhstan. (08.06.2019)

Nursultan Nazarbayev shocked Kazakhstan on Tuesday with his resignation after nearly three decades in power. Central Asia expert Andrea Schmitz explains what the move could mean for Kazakh-China ties. (21.03.2019)