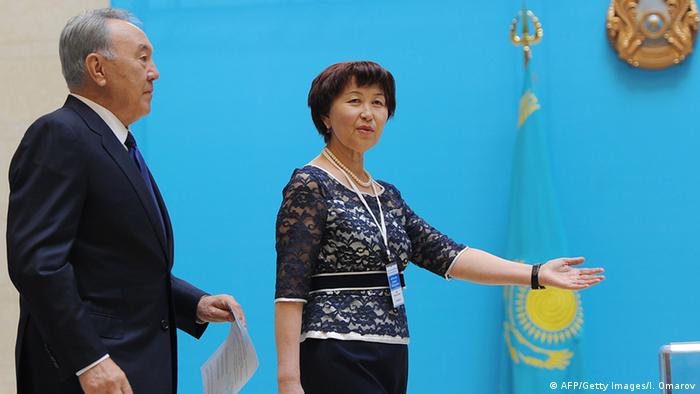 Officials from the Organization for Security and Cooperation in Europe (OSCE) monitoring mission gave a grim assessment of the weekend's elections in Kazakhstan on Monday.

"Voters were not offered a genuine choice between political alternatives," Cornelia Jonker, head of the OSCE monitoring mission said, noting "significant restrictions to the freedom of expression, as well as to the media environment."

The official result of Sunday's election was that incumbent President Nursultan Nazarbayev (pictured, left) won 97.7 percent of the vote in an election where voter turnout was reported to be more than 95 percent.

Last time around, Nazarbayev swept 95.5 percent of the votes in 2011's presidential election.

This year's result gives Nazarbayev, who has been in power since 1989, his fifth consecutive five-year term leading the vast, oil-rich Central Asian nation. He began his rule as a Soviet apparatchik in 1989, serving Moscow until the breakup of the USSR in 1991.The 74-year-old, who cast his ballot in the capital Astana, was widely expected to win against the two other candidates by a large margin. He had called the presidential elections a year ahead of schedule.

"The incumbent and his political party dominate politics, and there is a lack of a credible opposition in the country," the OSCE's Jonker said.