US bristles as Russia sends air-defense system to Syria

Russia has deployed an S-300 missile system to Syria. The United States has suspended talks on reviving a failed ceasefire, citing Russia's support of the regime of Syrian President Bashar al-Assad. 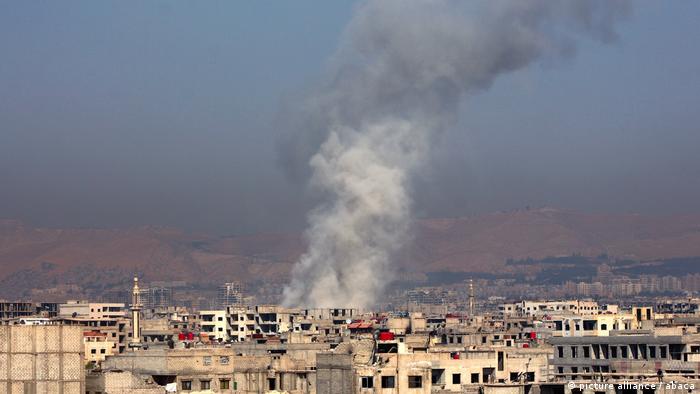 On Tuesday, Russia sent an air-defense missile system to Syria. The deployment immediately raised questions from the Pentagon.

"It depends on how the Russians plan to use it," Pentagon spokesman Peter Cook said. "Last I checked, the Russians said that their primary goal was to fight extremism, ISIL and Nusra, in Syria," Cook added, using a common acronym for "Islamic State" (IS) and making reference to a rival, al Qaeda-linked rebel group. "Neither one has an air force. ... So this is something we'll watch carefully. But it should be clear to the Russians and everybody else operating in Syria how seriously we take the safety of our air crews."

Last month, aircraft tied to the US-led coalition fighting IS struck troops from Syria's army near Deir el-Zour. The regime of President Bashar al-Assad has claimed that 60 Syrian soldiers died in the air raid. Officials in Washington say the US-led coalition launched the strike by mistake, but the Kremlin has questioned that explanation.

Though the United States put diplomatic contact on hold on Tuesday, the country has maintained a military-to-military dialogue intended to prevent incidents in the air between Russian and US-led coalition aircraft over Syria.

The rebels and the US-led coalition have accused Russia of indiscriminately bombing opposition-held areas in Aleppo, Syria's largest city, in an effort to help an offensive conducted by regime forces. Despite credible reports to the contrary, Russian officials deny that strikes have hit hospitals and other civilian facilities and on Tuesday expressed bewilderment about why the new missile system might provoke controversy.

"I remind you that the S-300 is a purely defensive system and poses no threat to anyone," Defense Ministry spokesman Igor Konashenkov said in a statement released Tuesday. "It's not clear why the placement of S-300 in Syria has caused such a stir among our Western colleagues."

In addition to the Tartus facility - its only naval supply station outside the former Soviet Union - Russia runs an air base outside Latakia, which houses warplanes used in the bombing campaign the country launched a year ago in support of Assad, a longtime ally. In August, a senior official said Russia planned to expand its Hmeimim air base in Syria into a permanent military facility. The base already has an S-400 air-defense system - the most modern in Russia's arsenal.