Russian Foreign Minister Lavrov and US Secretary of State Tillerson have met for lengthy talks amidst rising tensions between the two nations. Their meeting follows fresh US sanctions and Russia's US diplomat expulsion. 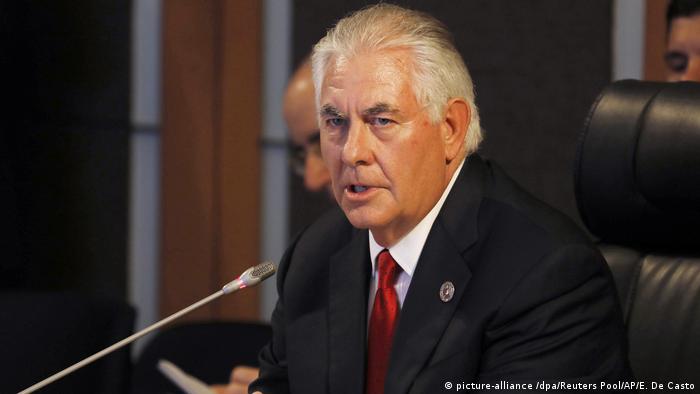 Russian Foreign Minister Sergey Lavrov said on Sunday that despite tensions with Washington, he believed his US colleagues were prepared to keep communication lines open with Moscow.

"We felt the readiness of our US colleagues to continue dialogue. I think there's no alternative to that," Lavrov told reporters after what he said was a lengthy meeting with US Secretary of State Rex Tillerson (above photo).

Lavrov said his US counterpart asked him extensively about Russia's decision to expel US diplomats in retaliation for Washington's latest round of economic sanctions on Moscow.

"He was primarily interested ... in details of those decisions that we grudgingly made in response to the law on anti-Russian sanctions," Lavrov said. He said he shared with Tillerson how Russia planned to carry out the expulsions but didn't provide details to reporters.

Tillerson emerged from the meeting an hour after it started without taking questions or giving remarks to reporters.

In addition to discussing issues with North Korea and cooperation on cybercrime, Lavrov said Moscow and Washington's envoys were set to discuss Ukraine.

US President Donald Trump's special representative for Ukraine negotiations will soon make his first visit to Moscow to discuss the conflict in eastern Ukraine.

Read more: US sanctions on Russia could endanger energy security for EU

Lavrov also said that Tillerson agreed to resume talks between US Undersecretary of State Thomas Shannon and Russia's Deputy Foreign Minister Sergey Ryabkov. The channel of communication was initially created to discuss hot spots, but it was suspended after the US imposed tighter sanctions on Russia.

On Thursday, Trump reluctantly signed into law sanctions that target the Russian energy sector and place new limits on US investment in Russian companies.

Lawmakers in Congress passed the bill as a response to Russia's alleged interference in the 2016 presidential election, its involvement in the Syrian conflict and its annexation of Ukraine's Crimea region.

Read more: Relations with Trump and Putin - What's the next move?

Russia said the sanctions amounted to a full economic war and ordered Washington to cut 755 of its 1,200 embassy and consulate staff in Russia. They also seized two US diplomatic properties.

There has been some confusion regarding the cuts as the US is believed to have far fewer than 755 American employees working in the country.

Russia has repeatedly rejected allegations that it interfered in the US election while Trump has denied any collusion with Moscow.