The US ambassador to the UN has lambasted the organization following the failed ceasefire in Syria. She accused the Damascus government and its ally Russia of prolonging civilian suffering in rebel-held eastern Ghouta. 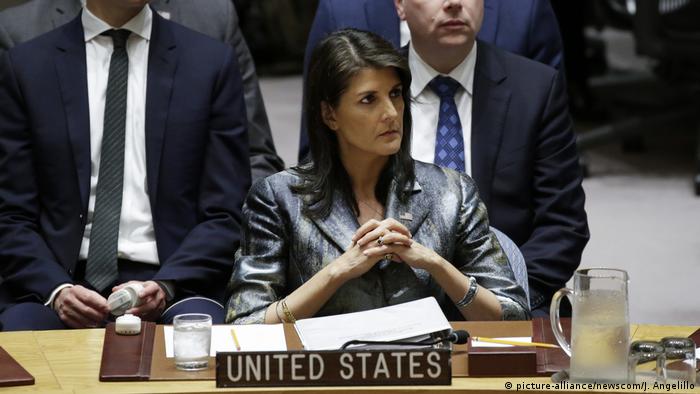 The US ambassador to the UN, Nikki Haley, told the Security Council in New York that Tuesday "should be a day of shame" for the organization after a 30-day ceasefire elapsed as fighting continued in Syria.

"History will not be kind when it judges the effectiveness of this council in relieving the suffering of the Syrian people," Haley said, calling for the council to pass a new resolution expressing outrage over the failure to heed the call for a halt to the fighting.

"After years of enduring siege and starvation, residents are surrendering eastern Ghouta," she went on, referring to a Damascus suburb that government forces have almost fully recaptured after a bitter monthlong offensive.

The recapture of eastern Ghouta would be the biggest victory for Syrian President Bashar al-Assad since December 2016, when government forces regained control of the northern city of Aleppo aided by a Russia-backed offensive.

Haley said 1,600 people had "died on our watch" in eastern Ghouta since the 15-member council unanimously adopted a ceasefire resolution on February 24 following negotiations with Russia. The Syrian government had "made a mockery" of the ceasefire, she added.

The resolution had been designed to enable humanitarian aid to reach civilians. Sweden and Kuwait, who jointly drafted it, said it remains in force, but added in a statement that they were "deeply disappointed" at the lack of its implementation.

Haley accused Moscow of using its veto on the Security Council to stop effective implementation of the resolution.

The Russian Ambassador to the UN, Vassily Nebenzia, retorted that his country was the only member taking "concrete measures," adding that Russia had ordered daily "humanitarian pauses" and allowed more than 100,000 people to be evacuated from eastern Ghouta.

Nebenzia said the departures from eastern Ghouta had been voluntary and that Russia's forces were providing food, shelter and medical aid to those in need.

"Perhaps it is not to the liking of some, but in fact we are the sole member to undertake concrete measures to implement Resolution 2401," Nebenzia said.

Concerns over fate of civilians

France meanwhile said on Tuesday that it was concerned about the fate of about 55,000 civilians held in nine camps administered by the Syrian government near eastern Ghouta without access to water or electricity, with UN aid agencies denied access to the area.

"Their fate has not improved. Their hell has just moved a few kilometers away," French Ambassador Francois Delattre said.

The Syrian Observatory for Human Rights said the biggest convoy of evacuees to date left on Tuesday, with buses carrying 7,000 people, including some rebel fighters.

Lowcock also reiterated calls for Damascus to grant access to aid convoys which, he said, are ready to supply food to 16,500 people in the rebel-held area.

Civilians are continuing to flee from the Damascus suburb of eastern Ghouta, Russian Foreign Minister Sergey Lavrov says. Hundreds have died there in recent weeks. (16.03.2018)