US Air Force: Missiles fired at Saudi Arabia from Yemen have 'Iranian markings'

A top US general has claimed there is an Iranian role in missiles fired at Saudi Arabia by Yemen's Houthi rebels. Heightened tensions between Iran and Saudi Arabia threaten to expand beyond Yemen into a regional war. 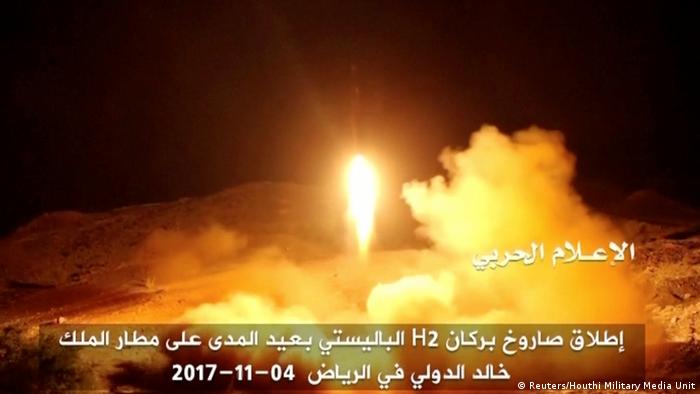 "What we have seen, clearly from the results of the ballistic missile attacks, that there have been Iranian markings on those missiles, that's been demonstrated," Lt. Gen. Jeffrey L. Harrigian, who commands US Air Forces Central Command, told reporters. "To me that connects the dots to Iran in terms of who's providing those missiles and that capability."

The comment further ratchets up tensions between regional rivals Iran and Saudi Arabia over Yemen at a time when a new crisis is brewing in Lebanon that threatens a broader regional conflict that could draw in the United States and Israel.  It also comes as the United States and Iran are competing in eastern Syria as the fight against the "Islamic State" winds down, risking a new conflict across the Middle East.

On November 4, Saudi Arabia intercepted a variant of the Volcano-1 (Burkan 2-H) long-range ballistic missile fired from Yemen toward the King Khalid International Airport near the capital, Riyadh.

Saudi Arabia said this week that Iran helped the Houthis and that the ballistic missile launch was "a blatant act of military aggression by the Iranian regime, and could rise to be considered as an act of war."

The Foreign Ministry later said investigators found evidence proving "the role of Iranian regime in manufacturing" missiles, but did not provide the evidence or elaborate.

Houthi rebels have fired more than 70 ballistic missiles towards Saudi Arabia since the kingdom led a coalition military intervention in 2015.  But the latest launch was the first time Houthis had targeted Riyadh, some 620 miles (1,000 kilometers) north of the border with Yemen. No deaths or damage were reported from the missile.

Media tied to Houthi rebels claimed a short-range missile had been fired in response to "Saudi-American aggression and crimes against the people of Yemen," in a reference to US air refueling support and provision of weaponry to the Saudi-led coalition.

Analysts say that the November 4 launch could presage further long-range ballistic missile strikes on major population centers in the Gulf States participating in the Saudi-led coalition as Houthi rebels seek to retaliate for airstrikes that have devastated Yemen.

"The fact that they (Houthis) have the capability to strike Riyadh raises the political stakes as well as the cost of war for Saudi Arabia," April Longley, an expert on the Arabian Peninsula for the International Crisis Group, wrote in an analysis. "It also means that other Gulf cities may soon be in target range; on 8 November, the Houthis threatened further attacks on Saudi and Emirati ports and airports."

"Given growing tensions between Saudi Arabia and Iran, and the US administration's eagerness to push back against Tehran, missile strikes by the Houthis in Gulf countries or in the Red Sea arguably are the single most dangerous trigger points for widening the conflict beyond Yemen to a regional confrontation," she added.

How much influence does Iran have over Houthis?

Saudi Arabia has repeatedly accused Iran of arming the Shiite Houthi rebels and their allies. Iran says it supports the Houthis politically and domestically, but denies arming them.

Ali Vaez, an Iran expert at the International Crisis Group, wrote in an analysis that while Iran benefits from Saudi Arabia being stuck in a Yemen quagmire at a low cost, "it is unclear whether Iran exerts the kind of influence over the Houthis that would enable it to order or prevent such an attack."

He cited previous instances of the Houthis ignoring Iran's advice and warned that "Iran ultimately might pay a price for actions by an allied group it does not control."

The Houthis say the missile variants are produced domestically and are remnants of previous stockpiles. Yemen has had ballistic missiles dating back to the 1970s when the country was split between the north and south before reunification in 1990.

However, Saudi Arabia and the United States suspect Iran may be providing technical aid and parts to help advance the Houthi ballistic missile program.

The Saudi-led coalition has a tight land, air and sea embargo over Yemen in order to block weapons transfers, making it difficult for Iran to supply ballistic missiles or components.  The blockade was further expanded this week, prompting international concerns over supplies of humanitarian aid in a country on the brink of famine.

Iran's Revolutionary Guard chief, Maj. Gen. Mohammad Ali Jafari, said earlier this week that Tehran can't transfer missiles to Yemen due to the blockade and that they were made there.

Harrigian didn't provide information on the type of missile used against Riyadh or show images of debris. He also didn't explain how Iran may have got around the Saudi blockade.

"How they got it there is probably something that will continue to be investigated over time," the lieutenant general said.