The decision to greenlight Joe Biden's transition was made independently, said the head of the General Services Administration. Biden's team said the US agency dubbed Biden and Harris "the apparent winners" of the vote. 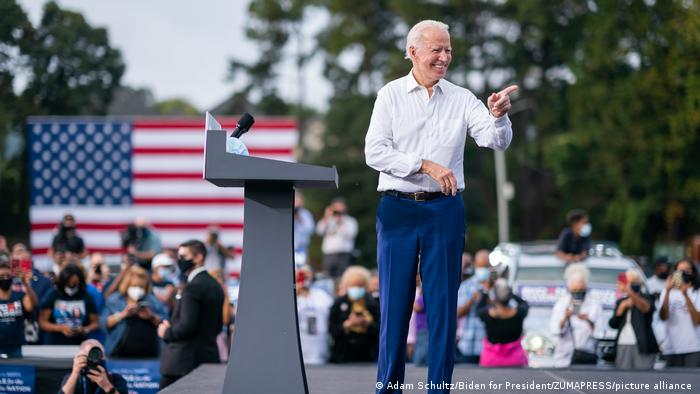 The US General Services Administration has told President-elect Joe Biden that his transition can formally begin, according to a letter from GSA Administrator Emily Murphy.

The letter marks the first time the administration has acknowledged President Donald Trump's defeat, more than two weeks after Biden was declared the winner by virtually all major observer bodies and media outlets.

"Please know that I came to my decision independently, based on the law and available facts," Murphy said. She added that she did not act under political pressure.

"I was never directly or indirectly pressured by any Executive Branch official — including those who work at the White House or GSA —with regard to the substance or timing of my decision. To be clear, I did not receive any direction to delay my determination."

The move means that Biden's team will now have federal funds and an official office to conduct his transition over the next two months. It also allows for Biden and Vice President-elect Kamala Harris to receive regular national security briefings that Trump also gets.

Under US law, the outgoing administration must work with an incoming president's team to help ensure stability.

Trump tells GSA to go ahead with 'initial protocols'

Trump, who has far refused to concede defeat, tweeted that he had given Murphy the go-ahead, despite plans to continue with legal challenges.

"I want to thank Emily Murphy at GSA for her steadfast dedication and loyalty to our Country. She has been harassed, threatened, and abused – and I do not want to see this happen to her, her family, or employees of GSA," he said.

"Our case STRONGLY continues, we will keep up the good ... fight, and I believe we will prevail! Nevertheless, in the best interest of our Country, I am recommending that Emily and her team do what needs to be done with regard to initial protocols, and have told my team to do the same," Trump wrote.

Biden's team also confirmed the move. "The GSA administrator has ascertained President-elect Joe Biden and Vice President-elect Kamala Harris as the apparent winners of the election, providing the incoming administration with the resources and support necessary to carry out a smooth and peaceful transfer of power."

A letter from his transition office said the duo would first address the pandemic and economy.

"Today's decision is a needed step to begin tackling the challenges facing our nation, including getting the pandemic under control and our economy back on track," transition director Yohannes Abraham said in a statement. "This final decision is a definitive administrative action to formally begin the transition process with federal agencies."

"In the days ahead, transition officials will begin meeting with federal officials to discuss the pandemic response, have a full accounting of our national security interests, and gain complete understanding of the Trump administration's efforts to hollow out government agencies," said Abraham.