Joe Biden to nominate Antony Blinken as secretary of state

Joe Biden has chosen Obama administration veteran Antony Blinken for the top foreign policy job in the US. Blinken faces the tough task of rebuilding global relationships and repairing a broken State Department. 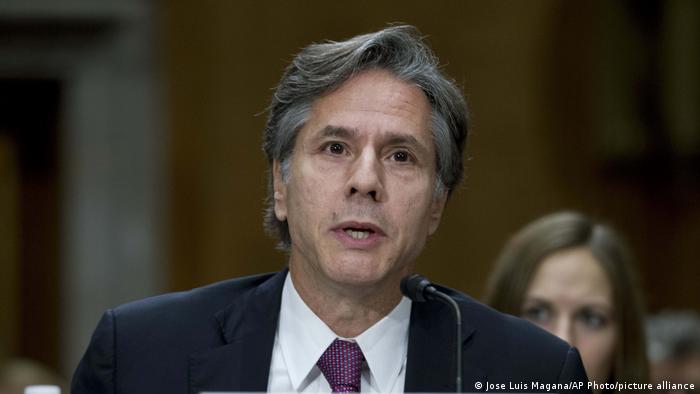 Biden has moved forward with plans to fill out his government even as outgoing President Donald Trump refuses to concede defeat, pursuing groundless legal challenges in several key states and dismissing the presidential transition process.

"We have no time to lose when it comes to our national security and foreign policy," Biden said in a statement. "These individuals are equally as experienced and crisis-tested as they are innovative and imaginative," he said.

Antony Blinken, former deputy secretary of state and deputy national security adviser during the Barack Obama administration, has been tapped to be secretary of state. His nomination must be submitted to the US Senate for approval.

If confirmed, Blinken faces the tough task of leading the Biden administration's bid to reshape US relationships with the rest of the world and in particular, repair relationships with allies who have been alienated during the Trump years.

"Democracy is in retreat around the world, and unfortunately it's also in retreat at home because of the president taking a two-by-four to its institutions, its values and its people every day," Blinken told AP in September.

"Our friends know that Joe Biden knows who they are. So do our adversaries. That difference would be felt on day one,'' he added.

The incoming foreign affairs chief is also inheriting a deeply demoralized and depleted career workforce at the State Department, after Trump's two appointees, Rex Tillerson and Mike Pompeo, carried out the administration's plans to gut the agency, which were only slowed down by congressional intervention.

This allowed the department to escape massive proposed cuts of more than 30% in its budget for three consecutive years, but it still saw significant number of departures from its senior and rising mid-level ranks, as many diplomats opted to retire or leave the foreign service given limited prospects for advancements under Trump's government.

Kerry comes back in climate role

Biden nominated Alejandro Mayorkas to lead the Department of Homeland Security, which oversees immigration policy. He is the first Hispanic-American to hold that post.

Former deputy CIA director Avril Haines was tapped as Biden’s director of national intelligence, becoming the first woman to ever hold that position, while long-time diplomat Linda Thomas-Greenfield will be nominated to serve as his ambassador to the UN.

All of the nominees are veterans of the former 2009-2017 Obama-Biden administration and have deep public policy experience in their fields.

Biden also brought back John Kerry, former presidential candidate and Secretary of State after Hillary Clinton, to his team. He has been tapped to lead the Biden administration's effort to combat climate change.

She will likely take the lead on pushing through another stimulus measure to boost the country's economic recovery. Yellen, a progressive macroeconomist, is married to Nobel Economics Prize-winner George Akerlof. Her experience managing policies on the job market is seen as an asset, at a time when the pandemic has doubled unemployment to 6.9%.

Read more: US federal interest rate to stay near zero through 2023

She is also a staunch climate advocate, and has called for a carbon tax to fight climate change. "We need public policy oriented toward making a big difference on climate change," she said recently. As chair of the Federal Reserve from 2014 to 2018, she advocated keeping interest rates low to support employment, a policy which Trump criticized for creating a "big, fat ugly bubble."

After taking office in 2017, Trump ousted Yellen, making her one of the few chairs not to stay in office for a second term. She also served as economic advisor to former president Bill Clinton between 1997, taught at the University of California, Berkeley and ran the San Francisco Federal Reserve Bank.

Donald Trump's chances of overturning his US presidential election loss suffered a fresh blow after a Pennsylvania federal judge dismissed his lawsuit. His campaign has also requested a recount of votes in Georgia.

US President Donald Trump has made several legal attempts to overturn the election result. Now, he is reportedly making a direct appeal ahead of a Monday deadline to certify results in the state of Michigan.