Federal and state courts in Pennsylvania and Michigan have rejected more lawsuits alleging voter fraud in the US election. Joe Biden comfortably won this month's poll, but incumbent Donald Trump has refused to concede. 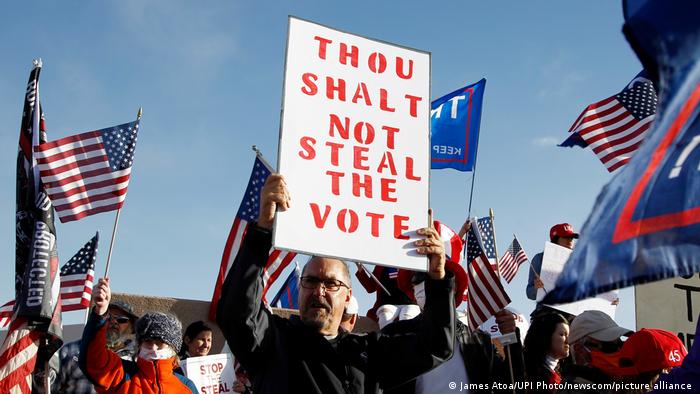 Courts in the US states Pennsylvania and Michigan on Friday denied more attempts by Republicans and supporters of US Donald Trump to change the result of this month's elections.

A Pennsylvania federal appeals court rejected an effort to block thousands of mail-in votes, while a court in Michigan declined a request to stop the certification of election votes in Detroit.

Read more: After Trump's loss: What does the future hold for Republicans?

In his bid for a second term, Trump lost to former-Vice President Joe Biden in the November 3 poll but has repeatedly and baselessly alleged voter fraud. The US president has refused to concede the election, as is tradition of the losing candidate, and in a tweet on Friday said, "This Election was Rigged." Twitter labeled the tweet "disputed" as there is no evidence of fraud in the US presidential election.

The court rulings come as some media made final projections for the presidential election. Trump was declared the winner of North Carolina on Friday, while US media has projected Biden as the winner of Georgia. Those results would give Biden 306 electoral votes and Trump 232.

A federal appeals court in Pennsylvania has blocked an effort led by a Republican congressional candidate to throw out 9,300 mail-in votes that arrived after election day but within the period allowed by state law.

The ruling involves a decision by the state's supreme court to allow for mail-in votes to be counted on November 6, three days after polling stations in the state closed.

US Circuit Court Judge Brooks Smith, one of three judges on the panel, cited noted the "unprecedented challenges" the country has faced this year, especially the "vast disruption" that is the coronavirus pandemic.

The court sought to uphold "a proposition indisputable in our democratic process: that the lawfully cast vote of every citizen must count," Smith said.

Biden won Pennsylvania  by an estimated 62,000 votes out of over 6.8 million cast. The Trump campaign and its Republican surrogates have filed 15 legal challenges in Pennsylvania contesting the result.

Read more: Trump biographer: 'He'll finally get what he wanted'

An effort by Trump supporters in Michigan to change the state's election result also fell short. A state court denied their request to block the certification of votes and appoint an independent auditor in Detroit.

Results in Wayne County, in which Motor City lies, heavily favored Biden. The lawsuit alleged fraud and voting irregularities in the county, which it denies.

Chief Justice Timothy Kenny of the Third Judicial Circuit Court of Michigan rejected those allegations, saying in his ruling that the "plaintiffs' interpretation of events is incorrect and not credible."

"It would be an unprecedented exercise of judicial activism for this Court to stop the certification process of the Wayne County Board of Canvassers," Kenny wrote in his ruling.

Biden won by nearly 150,000 votes in Michigan, a state in which Trump was victorious in 2016. Michigan is set to certify its election results on November 23.

Read more: What will happen to Donald Trump?

Most Germans pleased with Joe Biden's win in US election

A vast majority of Germans were pleased that Joe Biden defeated Donald Trump in the US presidential election, according to a new survey. Most also thought US-German relations would improve during Biden's presidency.