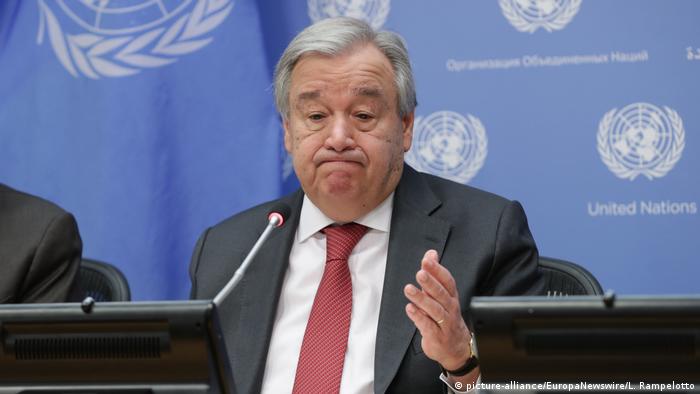 UN Secretary-General Antonio Guterres on Tuesday warned that a "wind of madness is sweeping the globe," in reference to escalating conflicts across the Middle East.

"All situations are different but there is a feeling of growing instability and hair-trigger tensions, which makes everything far more unpredictable and uncontrollable, with a heightened risk of miscalculation," Guterres told a press conference at the UN headquarters in New York.

'The present situation is unsustainable'

Guterres: 'The present situation is unsustainable'

Guterres pointed specifically to Libya, calling the situation there a "scandal."

"I am deeply frustrated with what's happening in Libya. The comments follow an international summit in Berlin last month that was meant to help develop a roadmap to peace in Libya. Those at the meeting agreed to take steps to uphold a UN arms embargo, end foreign interference and work towards a cease-fire agreement.

Talks between Libya's warring parties –Khalifa Haftar's Libyan National Army (LNA) and the UN-backed Government of National Accord (GNA) – took place in Geneva on Monday. However, the leaders of the two sides did not meet face to face, instead sending representatives in their place.

Earlier on Tuesday, UN envoy to Libya Ghassan Salame announced that there was a "genuine will to start negotiating" between the two sides, although both were violating an arms embargo. He has also denounced the number of arms in the country, with more than "20 million pieces of weaponry" in Libya.

Libya has been embroiled in an ongoing conflict since the ouster of former leader Moammar Gadhafi in 2011.

At the conference, Guterres also expressed "enormous concern" for the escalation of violence in Idlib, Syria's last rebel-held province. He said the UN is "particularly worried" about the escalations between Syrian and Turkish forces, which saw troops on both sides killed by shelling in the province.

He said the conflict must be de-escalated "before the escalation comes to a situation that then becomes totally out of control."

On Yemen, Guterres touted the cessation of attacks initiated by Houthi rebels on Saudi Arabia, which backs the country's internationally recognized government. However, he said the last days have seen tensions rise once again.