Hundreds of Palestinians have been injured and at least 15 killed by Israeli security forces facing down land protests on the Gaza-Israel border. Germany has seconded the United Nation's calls for restraint.

The United Nations on Saturday urged an independent and transparent investigation into the deaths of more than a dozen Palestinians that took place on Friday, the first day of six weeks of protests in Gaza.

UN Secretary-General Antonio Guterres called for "those concerned to refrain from any act that could lead to further casualties," in a statement through his spokesman Farhan Haq.

The UN Security Council has called a closed emergency meeting at the request of Kuwait to discuss the deadly clashes in Gaza.

The organization's announcement came as protests carried over into a second day. The gatherings were smaller and quieter than those on Friday, but Gaza health officials said at least 10 Palestinians were wounded.

On Saturday the German Foreign Ministry also expressed its concern over the violence in Gaza and called on all participants to avoid further escalation. "The incident shows how absolutely necessary it is to resume negotiations," it said in a Twitter statement.

At least 15 Palestinians were killed on Friday: Two of them by Israeli tank fire, according to the Gaza Health Ministry. The same source said 400 people were wounded by live Israeli gunfire and others were struck by rubber bullets or treated for the effects of tear gas.

Palestinian president Mahmoud Abbas declared a day of national mourning on Saturday as thousands of Palestinians gathered on Saturday for the funerals of some those killed. He laid the blame fully on Israel.

The violence broke out after tens of thousands of Palestinians, including women and children, gathered at five points along the fenced border of the blockaded territory. Protesters called for the return of tens of thousands of refugees who were expelled or fled during the war around Israel's creation in 1948

Organizers had urged demonstrators to stay away from the border area, but as the day wore on, hundreds of young people moved closer to the frontier, from where the Israeli military kept watch.

The Israeli military said Palestinians rolled burning tires and threw stones at the Israeli forces, who responded with live bullets, tear gas and fired at what they called the "main instigators."

Witnesses said the Israeli military used a drone to drop tear gas over at least one location. Three sites in particular were targeted with tank fire and an airstrike after the Israelis claimed there had been a shooting attack against their soldiers. No Israeli soldier was injured.

Palestinians and Turkish authorities accused Israel of using disproportionate force. The UN Security Council, which met on Friday night in New York, heard fears about a possible escalation of the violence.

"The risk of escalation is very real," the French representative said. "There is the possibility of a new conflict in the Gaza Strip."

The protest, which has the backing of Hamas, is expected to last more than six weeks, as US President Donald Trump's decision to recognize Jerusalem as Israel's capital becomes final when the US Embassy moves to Jerusalem.

'A message to Trump'

"The Great March of Return is a message to Trump," Ismail Haniyeh, the chief of the Hamas political bureau, told the crowds.

"There is no concession to Jerusalem, no alternative to Palestine, and no solution but to return. This is the Palestinian people taking the initiative and making the event for the sake of Palestine... for the sake of Jerusalem and the right of return," Haniyeh said. 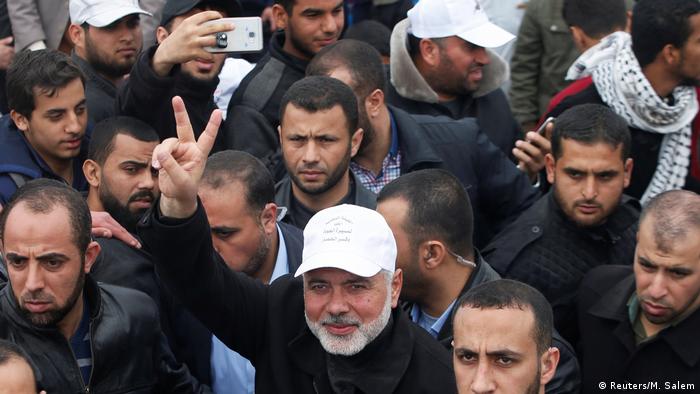 The protests began as Palestinians marked Land Day, commemorating the killing of six unarmed Arab protesters in Israel in 1976.

Dubbed "The Great March of Return," organizers said the rallies would continue until May 15, when Palestinians commemorate the Nakba, or "catastrophe," where more than 700,000 Palestinians fled their homes or were expelled during the war that led to the creation of Israel in 1948.

The date is one day after the new US Embassy in Jerusalem is expected to be formally opened.

According to the United Nations, about 1.3 million of Gaza's two million residents are refugees or the descendants of refugees, and the protest is calling for them to be allowed to return to land that has been taken by Israel. 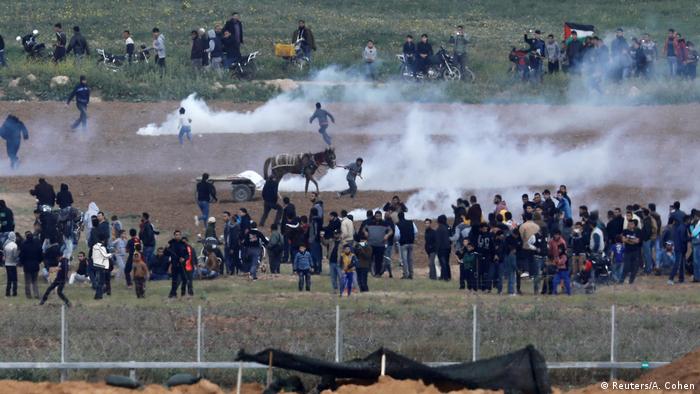 Tear gas was used against Palestinians

On Good Friday, hundreds of pilgrims retraced the last journey of Jesus in the Old City of Jerusalem. Many Christians in Gaza, however, are still waiting for permits to take part in the Easter festivities. (30.03.2018)