Dozens of Palestinians injured in clashes with Israeli security forces during ′Day of Rage′ | News | DW | 29.12.2017 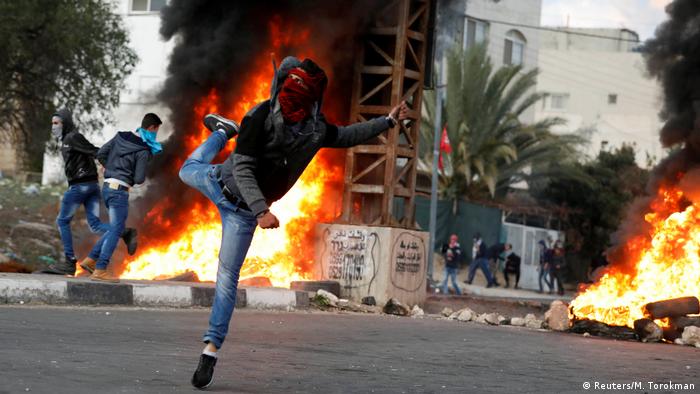 Dozens of Palestinians were wounded by Israeli gunfire in the West Bank and Gaza on Friday as thousands took to the streets in a fresh "day of rage" protest over US President Donald Trump's controversial decision to recognize all of Jerusalem as Israel's capital.

It was the fourth week in a row that Palestinians demonstrated after Friday prayers. At least 50 people were wounded by Israeli gun fire, with some of the most violent exchanges occurring along the Gaza border.

An Israeli military spokeswoman said 4,000 Palestinians protested across the occupied territories, with some throwing rocks and fire bombs and setting tires on fire. Most of the protesters were met with tear gas, according to the Israeli military, but there was an acknowledgement that soldiers also responded with gunfire

Israeli soldiers took aim at the "main instigators" who she said posed a direct threat to the troops while trying to damage the security fence along the border.

In Gaza, demonstrators chanted "Death to America, death to Israel, and death to Trump" and militants fired rockets into Israel, prompting retaliatory strikes by Israeli tanks and aircraft.

"In response to the rockets fired towards Israel, IDF (Israel Defense Forces) tanks and IAF (Israeli Air Force) aircraft targeted two posts belonging to the terrorist organization Hamas in the northern Gaza Strip," the army said in a statement.

Israel said it targeted posts belonging to Hamas, the Islamist group that controls the Palestinian enclave, after intercepting two of the three rockets fired into Israel. The third rocket struck a building, causing damage but no casualties.

Twelve Palestinians have been killed in clashes with Israeli forces since Trump’s controversial announcement on December 6.

Trump's declaration sparked outrage among Palestinians and across the Middle East, as well as infuriating world powers. He reversed decades of U.S. policy on one of the most sensitive issues at the heart of the Israeli-Palestinian conflict.

Israel wants Jerusalem to be its eternal and indivisible capital but Palestinians want the city's eastern sector to be the capital of an independent Palestinian state. Israel captured the eastern portion of Jerusalem during the 1967 Middle East War and subsequently annexed it in a move that has never been recognized internationally.

Many countries regard Jerusalem's status as something to be negotiated during peace talks between Israel and the Palestinians, although that peace process is currently stalled.

The UN General Assembly rejected Trump's Jerusalem declaration during a vote on December 21.

Among the 193 UN members, nine opposed the resolution rebuking Trump and a further 35 abstained, while 128 countries supported it. Twenty-one countries did not vote at all due to their absence.