One person was displaced every two seconds in 2017, the newest UN refugee agency figures show. New displacements came from crises in Myanmar, Democratic Republic of the Congo and Syria, in particular. 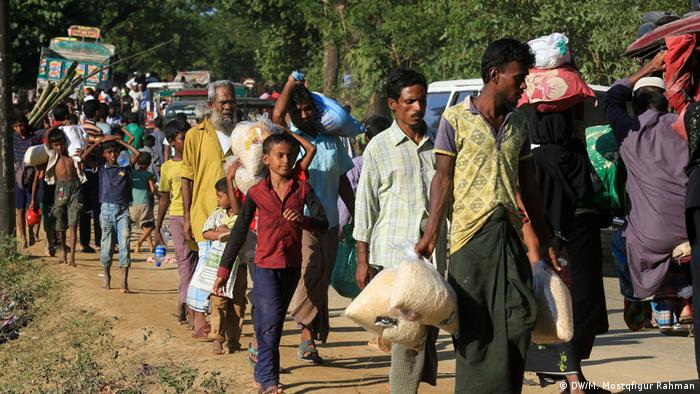 The United Nations refugee agency on Tuesday said 68.5 million people are now displaced due to war, violence and persecution.

Crises in areas including South Sudan, Congo and Syria, as well as mass migration of Muslim Rohingya from Myanmar raised the overall number from 65.6 million in 2016.

Around 70 percent of those currently displaced are from just 10 countries, the UN High Commissioner for Refugees Filippo Grandi said. The figure included some 40 million internally displaces people worldwide, with Colombia, Syria and Democratic Republic of Congo making up the largest numbers.

One person displaced every two seconds

"If there were solutions to conflicts in those 10 countries, or in some of them at least, that huge figure, instead of rising every year, could start going down," Grandi said.

The UN report showed 16.2 million people were newly displaced last year, including those forced to flee for the first time as well as those who were already displaced.

This equates to some 44,400 people being pushed out of their homes every day, or one person every two seconds, UNHCR said.

The number of refugees who returned to their home country was 667,400 compared to 552,000 in 2016, accounting for 3 percent of the refugee population.

The report said 85 percent of refugees are in developing countries, many of them "desperately poor." Most came from Syria, Afghanistan, South Sudan, Myanmar, Somalia, Sudan and Congo.

It also said the impact of refugees coming to Europe in 2015 and 2016 was reflected in the growing refugee populations in countries as their asylum applications were gradually processed. In Germany, the refugee population increased by 45 percent.

On air: A rural revolution in Myanmar

Myanmar's first community radio station Khayae FM went on air at the beginning of 2018. Volunteers produce radio programs for 25,000 listeners on the outskirts of the capital Rangoon. DW Akademie supports the project. (17.05.2018)

Myanmar: Everything will change

It's an unprecedented upswing for Myanmar's media. At the center: journalist U Myint Kyaw. He's fighting for imprisoned colleagues, is sitting on the newly-formed Press Council and is training a new generation. (02.05.2016)