An unexploded Second World War bomb was found near the Signal Iduna Park in Dortmund on Thursday morning. The bomb was defused safely midway through the afternoon. 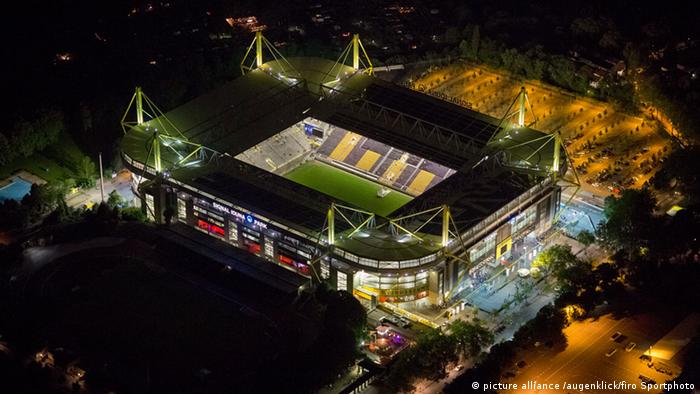 Just hours before Dortmund head coach Jürgen Klopp was due to give his press conference ahead of the derby against Schalke, a 250-kilogram (550-pound) unexploded bomb of British origin was discovered near Borussia Dortmund's stadium, the Signal Iduna Park. The bomb was difused at just after 15:00 local time (14:00 UTC), whereupon it was taken to a temporary holding in Hagen before it will later be destroyed in a disassembly plant in North Rhein-Westphalia.

With a 250-meter safety radius, both the stadium and the fan world were evacuated as well as everyone living in the area.

"The area is sparsely populated. Nevertheless, we've got to make sure that there's no one inside the restricted area. Especially in the Bolmketal garden district," said city spokesman Hans-Joachim Skupsch to Ruhr Nachrichten on Thursday morning.

As was confirmed by a statement on the Dortmund city council's website, the unexploded bomb was found on the west side of the stadium on a construction site after analysis of an aerial photograph. Approximately 20 minutes after the news that the bomb had been disposed, the club confired via Twitter that the stadium and FanWorld area had been reopened.

The ground below many German cities remains littered with unexploded bombs dropped by Allied and Soviet forces during the Second World War. Most of the bombs are safely defused once discovered, but with hundreds of thousands of aerial photographs from the Second World War, it's hard to pinpoint exact locations.

In Germany's capital, Berlin, authorities believe 3,000 bombs still remain undiscovered, and experts warn that some of the munitions are growing increasingly dangerous as they rust and their fuses grow more brittle.

Authorities in the western German city of Cologne have been forced to use a controlled explosion to destroy a World War II bomb found at a construction site. Several thousand people had to be evacuated. (31.01.2014)

The discovery of a huge bomb left over from World War II in the west German city of Dortmund has prompted a mass evacuation. More than 20,000 people had to leave their homes. (03.11.2013)

At least one person has been killed after a bomb dating back to World War II went off near the western German city of Bonn. The explosion was reportedly triggered by an excavating machine. (03.01.2014)