The UN General Assembly has voted to condemn Israeli violence against Palestinian protesters in Gaza. A US attempt to blame Hamas failed to pass. 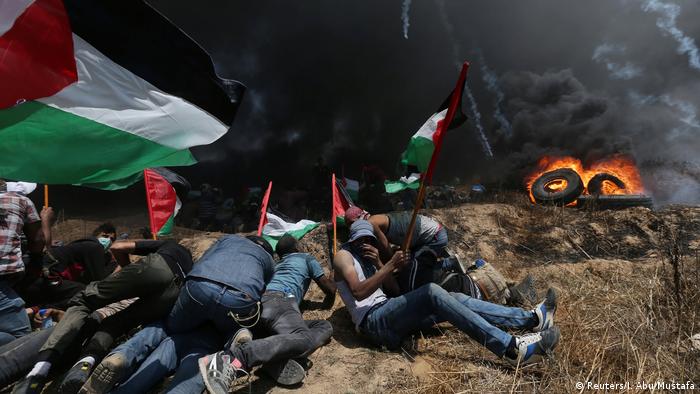 The UN General Assembly on Wednesday adopted by a sweeping majority a resolution condemning Israel for killing Palestinians in Gaza and rejected a US attempt to pin the blame on Hamas.

The resolution put forward by Algeria, Turkey and the Palestinians secured 120 votes in the 193-member assembly, with 8 votes against and 45 abstentions. The resolution came in response to a similar resolution being vetoed by the United States in the 15-member UN Security Council earlier this month.

The resolution deplores Israel's use of "excessive, disproportionate and indiscriminate force" against Palestinians, particularly in Gaza.

Australia, Marshall Islands, Micronesia, Nauru, Togo and the Solomon Islands joined the United States and Israel in voting against the resolution. Germany abstained.

More than 120 Palestinian protesters in Gaza have been killed by Israeli soldiers since late March, as well as nearly 4,000 injured. Israel blames Hamas, which controls the Gaza Strip, for inciting the protests. No Israelis have been killed.

The resolution goes further in requesting UN Secretary-General Antonio Guterres develop proposals "on ways and means for ensuring the safety, protection and well-being of the Palestinian civilian population under Israeli occupation, including ... recommendations regarding an international protection mechanism."

The idea of an international protection force was put forward at meeting of the Organization of Islamic Cooperation in Istanbul last month, but would need the support of the UN Security Council where the United States has a veto.

The resolution also calls for "immediate steps towards ending the closure and the restrictions imposed by Israel on movement and access into and out of the Gaza Strip."

Israel and Egypt have maintained a blockade on Gaza since Hamas took control of the strip in 2007. The blockade and Israeli offensives in Gaza in 2008 and 2014 have turned Gaza into a humanitarian catastrophe, with the UN warning it will be unlivable for its 2 million inhabitants by 2020.

The resolution did condemn rockets fired from Gaza into Israel, but did not explicitly mention Hamas. About 70 rockets were fired into Israel from Gaza on May 29, most of which were intercepted by Israel's missile defense system.

Reaction from Israel and US

Israeli UN Ambassador Danny Danon told the General Assembly before the vote that in supporting the Arab and Islamic backed resolution UN members were supporting a "terrorist organization" and "empowering Hamas."

The United States sought to add an amendment to the resolution blaming Hamas for "inciting" violence. The amendment received 62 votes in favor, with 58 against and 42 abstentions. However, it failed to get the two-thirds majority needed to be adopted.

US Ambassador Nikki Haley called the resolution biased against Israel.

"For some, attacking Israel is their favorite political sport. That's why we are here today," said Haley. "I wish everyone supporting this one-sided resolution would put as much energy into encouraging President Abbas to the negotiating table," she said.

Palestinian President Mahmoud Abbas is a rival of Hamas and has imposed punitive measures on Gaza. In recent days he has faced protests in the West Bank from Palestinians opposed to his policies against Hamas.

Palestinians officials have said they no longer view the US as a neutral arbiter in any negotiations with the Israelis since US President Donald Trump decided to recognize Jerusalem as Israel's capital and move the US embassy there in May.

Palestinian Ambassador to the UN Riyad Mansour called the US amendment blaming Hamas as "games and gimmicks" and urged ambassadors not to be "fooled" by the US proposal.

"We need protection of our civilian population," he told the General Assembly before the vote, adding that the resolution was "intended to contribute to a de-escalation of the volatile situation."

General Assembly resolutions are non-binding and there is no veto, but they carry political weight.

Turkey's Ambassador Feridun Hadi Sinirlioglu said the resolution was "about taking sides with international law" and showing the Palestinians that the world "does care about their suffering."

The General Assembly last held a contentious vote against the United States in December, when it overwhelming rejected Trump's decision to recognize Jerusalem as Israel's capital and move the US embassy there.

Israel's top court has upheld the use of lethal force against Palestinians amid weeks of protests on the Gaza border. The court said the protests took place in the context of Israel's long-running conflict with Hamas. (25.05.2018)

The move comes amid increased tensions with Israel in the aftermath of the US Embassy move to Jerusalem and the recent bloodshed in Gaza. Israel has questioned the legal validity of the Palestinian request to the ICC. (22.05.2018)

Dozens killed in Gaza as US opens Jerusalem embassy

Israeli forces have killed at least 58 Palestinians protesting along the Gaza security fence. Meanwhile, US and Israel celebrated the inauguration of a new US embassy in contested Jerusalem. (15.05.2018)

WorldLink: A glorious day in Israel?