The move comes amid increased tensions with Israel in the aftermath of the US Embassy move to Jerusalem and the recent bloodshed in Gaza. Israel has questioned the legal validity of the Palestinian request to the ICC. 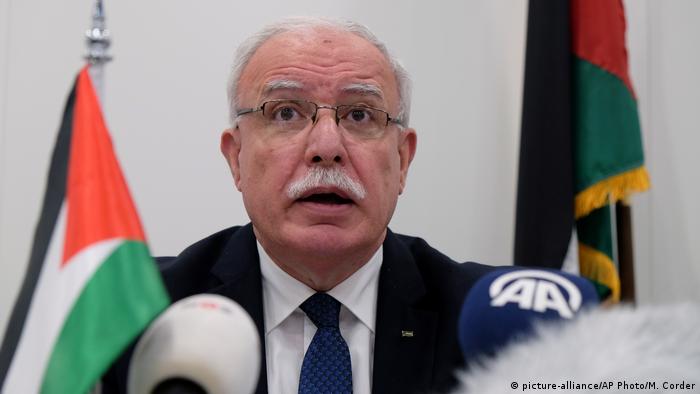 Foreign Minister Riad Malki told reporters in The Hague that he submitted the "referral" to the court during a meeting with the ICC's chief prosecutor, Fatou Bensouda.

The move is expected to further escalate tensions between the Palestinians and Israel, which have seen their relations worsen in recent days in the aftermath of the US Embassy move to Jerusalem and the death of over 100 Palestinians in Israeli fire during mass protests along the Gaza border.

Malki said the referral sought a probe into Israeli policies in the West Bank, east Jerusalem and Gaza Strip, including the country's settlement policies and last week's deaths in Gaza.

"There is a culture of impunity in Israel for crimes against Palestinians," Malki said. "This referral is Palestine's test to the international mechanism of accountability and respect for international law."

The referral gives the legal basis to the court's prosecutors to move beyond a preliminary inquiry they launched in January 2015 when the Palestinians first joined the ICC.

The ICC has the authority to hear cases of war crimes, genocide and crimes against humanity committed on the territory of its 123 members. This means Israel, a non-member, could still be targeted for crimes committed on Palestinian territory.

Israel hit back strongly against the Palestinian request to the ICC and questioned its legal validity.

"The purported Palestinian referral is legally invalid, and the ICC lacks jurisdiction over the Israeli-Palestinian issue, since Israel is not a member of the Court and because the Palestinian Authority is not a state," the Israeli Foreign Ministry said in a statement, calling the move a "cynical step."

Israel accused the Palestinians of violent incitement against Israel and exploiting women and children as human shields.

"Israel expects the ICC and its prosecutor not to yield to Palestinian pressure, and stand firm against continued Palestinian efforts to politicize the court and to derail it from its mandate," the Israeli statement said.

As Israel marks its Independence Day, 70 years after the modern-day state's foundation, Israeli author Lizzie Doron walks through her evolving feelings over the years regarding May 14. (14.05.2018)

UN human rights chief Zeid Ra'ad al-Hussein has slammed Israel for its treatment of Palestinians in the Gaza Strip. He said its response to recent protests was "wholly disproportionate." (18.05.2018)