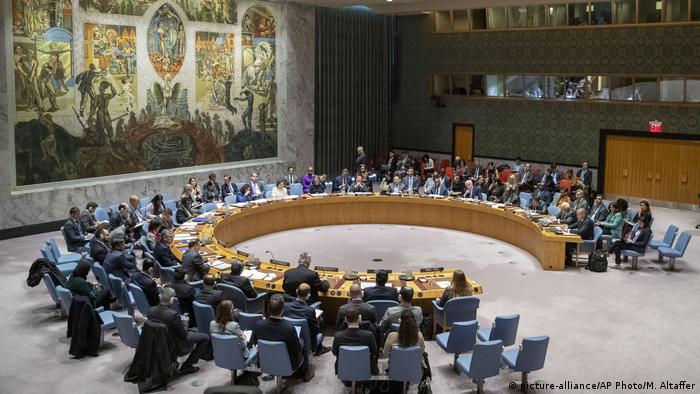 The UN Security Council on Wednesday overwhelmingly opposed the recent US policy shift on Israeli settlements.

Settlement policy is one of the most contentious issues in the decades-old Israeli-Palestinian conflict. Most of the international community views Israeli settlements in the occupied Palestinian territories as illegal — a view that Israel disputes.

"Unilateral moves fuel anger and disillusionment and significantly undermine the prospects for establishing a contiguous and viable Palestinian state with Jerusalem as the future capital of both states," said Nickolay Mladenov, UN special coordinator for the Middle East peace process.

The council's monthly meeting on the Middle East came just two days after Secretary of State Mike Pompeo said the US would no longer consider Israeli settlements to be a violation of international law, reversing US policy consensus that lasted four decades.

Fourteen of the 15 countries seated at the security council rejected the US measure.

US stands by decision

Cherith Norman Chalet, a deputy US ambassador to the UN said her country "remains committed to the cause of peace,” and that Monday's announcement "does not alter this fact."

"The US government is expressing no view on the particular legal status of any individual settlement, nor are we addressing or prejudging the ultimate status of the West Bank, that is for Israelis and Palestinians to decide,'' Chalet added.

Mladenov opened the council meeting expressing ''regret'' over the US decision and reiterating a December 2016 UN council resolution were ''a flagrant violation under international law.''

Prior to the meeting, the UK, France, Germany, Belgium and Poland also released a joint statement calling on Israel ''to end all settlement activity, in line with its obligations as an occupying power,'' saying such activity ''erodes the viability of the two-state solution and the prospects for a lasting peace.''

Israeli and Palestinian delegates weigh in

Israel's UN ambassador, Danny Danon, who is not a council member, was the lone vocal supporter of the US decision, saying it ''rights a historical wrong.''

Danon said criticism of the move represented an ''obstacle to peace'' that is ''preventing direct negotiations'' between Israelis and Palestinians.

The chief Palestinian delegate at the UN, Riyad Mansour, was also at the meeting and took a jab at the US decision, saying Donald Trump's administration had again made "another illegal announcement on Israeli settlements in order to sabotage any chance to achieve peace, security and stability."

Trump has made a series of pro-Israeli policy moves, which are popular with evangelical Christians in the US, an important part of his political base. It has also brought the US close to the Israeli government. Israeli Prime Minister Benjamin Netanyahu is a close ally of Trump.

Israel's cabinet has visited the Golan Heights to inaugurate the country's controversial new settlement. In March, Trump recognized the territory that Israel seized from Syria in 1967 as belonging to the Jewish state. (16.06.2019)

An Amnesty International report says travel sites are "driving settlement expansion" in Israeli settlements, a claim that has sparked outrage in Israel and among Jewish groups. (30.01.2019)