Funding for aid programs in Afghanistan has dried up since the Taliban takeover and experts have warned of an impending humanitarian crisis. The UN had originally aimed for $600 million in funding. 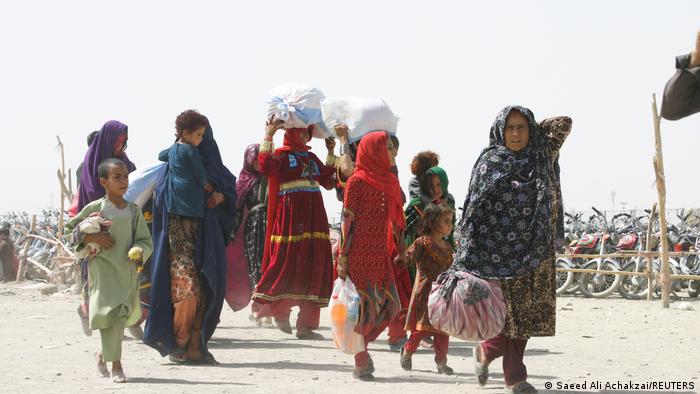 International agencies warn drought, the COVID pandemic and the Taliban takeover could lead to a potential humanitarian disaster in Afghanistan

The UN hosted a donor conference in Geneva on Monday in a bid to raise $606 million (€513 million) needed by December to keep aid programs in Afghanistan afloat.

By the end of the afternoon, UN Secretary General Antonio Guterres announced that donors had pledged over $1 billion.

"This conference has fully met my expectations in relation to the solidarity with the people in Afghanistan," Guterres said.

Since the collapse of the Western-backed Afghan government and the Taliban takeover in August, Afghanistan stands on the brink of a growing humanitarian crisis.

Many countries that were willing to provide aid have expressed growing hesitation due to concerns about how funds will be spent with the Taliban in power.

Forty government ministers, including German Foreign Minister Heiko Maas, the head of the International Committee of the Red Cross, Peter Maurer, as well as dozens of government representatives are attending both in person and virtually.

The German foreign minister said it was up to the international community to "take responsibility" for the people in Afghanistan. But aid agencies needed "proper access" and aid workers had to be able to carry out their work "without fear of intimidation tyranny or restrictions by the Taliban."

Secretary General Guterres, who hosted the meeting, said in his opening remarks that "the people of Afghanistan need a lifeline" during "their most perilous hour."

"The people of Afghanistan are facing the collapse of an entire country — all at once," he said.

The UN says humanitarian aid money would go to maintain medical services, the water supply and sanitation for millions of Afghans. Additionally, funding would support women and children and set up educational projects.

Guterres did not specify how much of the $1 billion in pledged funding would be distributed towards the UN emergency budget for the coming months, or what would be potentially provided later.

A survey of 1,600 Afghans the World Food Programme (WFP) carried out this month and last showed 93% of those surveyed lacked sufficient food, mostly because they could not get access to cash to pay for items.

"Banks are closed. The central bank doesn't issue liquidity to the private banks," Stefan Recker, the Country Director of Caritas in Afghanistan, told DW. "So aid agencies which want to work which want to deliver aid simply cannot due to lack of liquidity."

Even before the Taliban takeover, food circumstances in Afghanistan were dire. Mary-Ellen McGroarty, the WFP Country Director for Afghanistan, told DW. Drought and the coronavirus pandemic contributed to 14 million people being in severe hunger.

"It's critical for the humanitarian effort that in the greatest time of need, that the international community stands alongside the women and children and men of Afghanistan, whose lives have been upended through no fault of their own," she said.

Germany, US pledge millions in aid

German Foreign Minister Maas said on Monday that Germany has increased its humanitarian aid for Afghanistan and the region by €100 million. "We plan to provide a further €500 million to support Afghanistan and its neighboring states," Maas told reporters on the sidelines of the conference.

German Development Minister Gerd Müller warned of a looming humanitarian crisis. He called for a reform to the way international aid is set up. With an emergency UN fund of €10 billion, "we could prevent global deaths from hunger in advance," he told the Funke Media Group on Monday.

US ambassador to the UN, Linda Thomas-Greenfield, told the conference that Washington would provide nearly $64 million in new humanitarian assistance for Afghanistan.

"Let us commit today to meeting this urgent appeal for financial support, commit to standing by humanitarian workers as they do their all-important work, and to stepping up humanitarian action in Afghanistan so we can save the lives of Afghans in need," she said.

Thomas-Greenfield added that "Humanitarian aid agencies cannot do their job if the Taliban do not uphold ... humanitarian principles."

Situation in Afghanistan a 'race against time'

Filippo Grandi, the UN refugee commissioner, warned Sunday that a "resurgence of fighting, human rights violations or the collapse of the economy and basic social services" could cause more Afghans to flee abroad.

He landed in Kabul Monday to assess the situation where he was greeted by Khalil-ur-Rahman Haqqani, the Taliban's acting minister of refugees and repatriation and an important leader of the Haqqani network who has a $5 million (€4.24 million) American bounty on his head.

Anthea Webb, the WFP's deputy regional director, described the situation as "a race against time and the snow to deliver life-saving assistance to the Afghan people who need it most."

The World Health Organization, another UN agency, is seeking funds to keep hundreds of health centers from shutting down across the country, after their donors backed out with the Taliban takeover.

'Governing Afghanistan today will not be easy'

The Taliban government is back in power. But "the 1990s was a completely different time. Resistance will absolutely continue," an adviser to former President Hamid Karzai has warned in a Conflict Zone interview.

The UN chief has warned that the world is becoming "more chaotic, more insecure" and "more dangerous for everyone." He also said dialogue with the Taliban in Afghanistan was "absolutely essential."