'Governing Afghanistan today will not be easy'

The Taliban government is back in power. But "the 1990s was a completely different time. Resistance will absolutely continue," an adviser to former President Hamid Karzai has warned in a Conflict Zone interview.

A Taliban spokesman announced on Tuesday the names of the men who would fill key government posts as the group assumes complete power over Afghanistan. Despite previously claiming that they would rule differently to the group's repressive regime in the 1990s, the list was filled with mostly old-guard stalwarts. The Taliban's supreme leader said the new government would be guided by Islamic Sharia law as interpreted by their fundamentalist ideology.

But a top official in former President Hamid Karzai's government warned that same day in a DW interview that "if the Taliban insists on just being as pure and monolithic in terms of their governance as it seems today, then it would be very hard for them to govern."

"Governing Afghanistan today will not be easy. The 1990s was a completely different time. Resistance will absolutely continue," was the message Jawed Ludin, a former adviser to Karzai and deputy foreign minister in his government, had this week for the old-new rulers of his country. 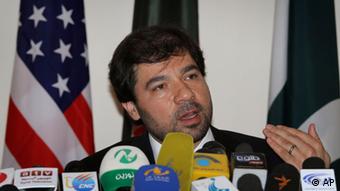 In an interview this week with Tim Sebastian on DW's Conflict Zone, Ludin lamented the missed opportunities by the extreme Islamist group, calling it "a historic mistake" to not broaden the composition of the government.

"They should have included technocrats. ... They could have just brought totally new faces and that would have given people more confidence and trust." He later added that "one thing that has changed for the worse since the '90s is the fact that today's Taliban are angry. They have a very deep-seated vengeance."

What led to the Afghan government's fall?

In a candid talk, Ludin admitted to mistakes made by himself and former President Hamid Karzai, saying they had contributed to the fall of the democratic republic of Afghanistan. "The fundamentals of the building of state could have been done better under his term, and we wouldn't be here today. … we probably didn't do a good job."

When asked about corruption accusations against Karzai, he responded: "I don't think he is corrupt personally. I think he made an error of judgment by basically putting the need for unity at that time ahead of reform and ahead of statebuilding."

But Ludin also did not spare criticism of Karzai's successor, the fleeing former president Ashraf Ghani, and his administration: A "significant part of what has happened was the Afghans' fault. I think we Afghans do tend sometimes to take far less responsibility than is due to us."

The former adviser underlined that the period of the last two decades "was, after all, an opportunity — a totally, absolutely historic opportunity unrepeatable in history for us to really make our country into a good normal society and we failed, and corruption is one of the factors. But I think there were other factors as well… the crisis of leadership that we had, our political elite did not really step up to the plate."

Can the West regain leverage?

Ludin is not too optimistic when it comes to the West's ability to influence the new Taliban government: "The Taliban see absolutely no reason to take seriously what the West is telling them because they, for them, the relationship with the West is optional."

He also criticized how the withdrawal unfolded: "The pulldown didn't have to mean a military victory and a takeover of Kabul by the Taliban. It could have happened in a more responsible manner... the Americans could have handled the peace process that they were engaged in for the last three years almost, in a better way … that this scenario could have been avoided."

The key mistake, in his view, is the deal brokered by former US President Donald Trump with the Taliban in February 2020. "The negotiations worked very well. It's just that the US too soon removed the leverage that it had on the battlefield as well as diplomatically, by concluding the agreement in a way that basically gives Taliban all of the power."

Since their return to power last August, the Taliban have focused on policing the life of Afghanistan's women. Most of them are barred from work, but there are some exceptions. DW's Sandra Petersmann met with a female doctor in Kabul.