During a one-hour conversation, the German chancellor called on Russia's president to immediately halt military action in Ukraine. Putin said Russia was "open" to talks with Kyiv if all his demands were met. 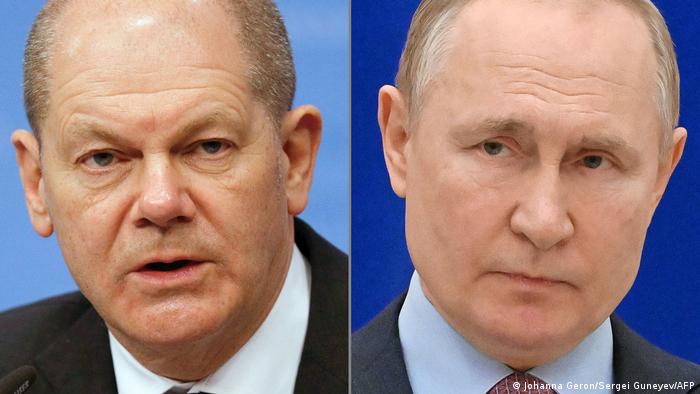 Scholz spoke with Putin on the phone

In an hour-long phone call, Scholz "called on the Russian leadership to immediately cease all hostilities and to allow humanitarian access to the embattled areas," German government spokesman Steffen Hebestreit said in a statement.

The call came a day after French officials said France's President Emmanuel Macron had also had also spoken with Putin.

The Kremlin said the call was initiated by the German side.

Russia 'open' to talks with Ukraine

According to the German statement, Putin told Scholz that a third round of talks between Russian and Ukrainian representatives was due to take place this weekend.

Meanwhile, the Kremlin said Putin told Scholz he hoped Ukraine would take a "reasonable and constructive" position during the planned third round of talks.

Russia is "open to dialogue with the Ukrainian side, as well as with all those who want peace in Ukraine. But on condition that all Russian demands are met," the Kremlin said.

During cease-fire talks on Thursday, Russian and Ukrainian negotiators agreed to set up humanitarian corridors in parts of Ukraine badly hit by fighting.

It was the second time they met since the war started on February 24. All rounds so far have failed to halt the fighting.

Mikhailo Podolyak, a Ukrainian negotiator involved in the talks and an advisor to President Volodymyr Zelenskyy, said talks will continue on Saturday or Sunday. "We are in constant contact," he told reporters.

According to the Kremlin's readout of the call, Putin told Scholz that Kyiv must agree to demilitarize, accept Moscow's sovereignty over Crimea and surrender territory to Moscow-backed separatists in eastern Ukraine.

The demands also include what Putin describes as the "denazification" of Ukraine.

The Kremlin added that Putin denied reports that Russian troops were bombing Ukrainian cities and said the "alleged ongoing air strikes of Kyiv and other large cities are gross propaganda fakes."

However, Ukrainians and international organizations have reported hundreds of civilian casualties since Putin launched the war.

The International Criminal Court, the Organization for Security and Cooperation in Europe and the UN Human Rights Council have all launched probes into possible war crimes in Ukraine.

Ukraine's Zelenskyy asks Putin for direct talks — as it happened

What do Russians think of Putin's war?