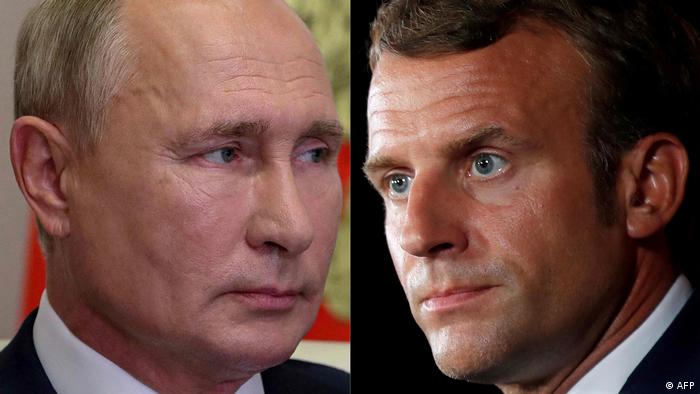 French presidency sources on Thursday said Emmanuel Macron told Russia's leader that his stated reasons for invading Ukraine were not in line with reality.

After a 90-minute phone call with Vladimir Putin on Wednesday, an aide also said the French president feared that Russia's invasion of its neighbor would intensify.

How did Macron's conversation with Putin go?

In separate accounts of the conversation from Elysee Palace, Macron told Putin that he was lying to himself and making a major mistake.

Macron had said Putin "wanted to seize control of the whole of Ukraine. He will, in his own words, carry out his operation to 'de-Nazify' Ukraine to the end," a senior aide to the French leader told the AFP news agency.

"You can understand the extent to which these words are shocking and unacceptable and the president told him that it was lies," the aide said.

"There was nothing in what President Putin told us that should reassure us. He showed great determination to continue the operation," the aide continued.

"The expectation of the president is that the worst is to come, given what President Putin told him."

According to a version of the conversation carried by the Reuters news agency, Macron had warned Putin that Russia would face consequences in the long term.

"You are lying to yourself. It will cost your country dearly, your country will end up isolated, weakened and under sanctions for a very long time."

Macron later tweeted that Putin had refused to stop his attacks on Ukraine. "It is vital to maintain dialogue to avoid human tragedy," said the French president. "I will continue my efforts and contacts. We must avoid the worst."

"Maintaining dialogue to protect the people, obtaining measures that will avoid human tragedy, putting an end to this war: this is the purpose of my commitment alongside President Zelensky and the international community," Macron added. "I am and will remain fully determined."

Kremlin vows to fight 'until the end'

A Kremlin account of the call, the third between the leaders since the war began, also indicated that Putin was uncompromising.

"Russia intends to continue the uncompromising fight against militants of nationalist armed groups," Putin said, according to the Kremlin account.

Putin was reported to have told Macron the invasion was "going to plan" and the conflict would continue "until the end" unless his terms were met in talks on the Ukraine-Belarus border.

How are relations between the two leaders?

Although Macron is expected to push for extra sanctions on Russia, the talks on Thursday reportedly remained relatively calm.

"President Putin has a way of talking that is very neutral and very clinical. He sometimes shows signs of impatience, but fundamentally there were no open signs of tensions during the exchanges," the aide said.

French officials admitted that although the conversation was "tense" when it came to content, the dialogue was frank.

The EFE news agency reported that there was an intention to maintain contact in the future, as both leaders "can say strong things to each other without the conversation breaking down."

The call was the third conversation since the invasion of Ukraine — the last having taken place on Monday — and, according to the Elysee, was initiated by Putin.

Macron was reported to have called Ukrainian President Volodymyr Zelenskyy directly after speaking to Putin.

Eight days into the war, Russian troops have faced stiffer resistance than expected from Ukrainian forces.

Moscow has acknowledged that nearly 500 Russian troops have been killed in the fighting so far and around 1,600 wounded.

Russia is accused of indiscriminately shelling civilian areas, among other acts. The UN human rights office says at least 227 civilians have been killed and 525 wounded.  Ukraine's State Emergency Service has said more than 2,000 have died.

The UN says that 1 million people have fled Ukraine since the Russian assault started, equivalent to more than 2% of Ukraine's population.