The president's office has denied reports that a prisoner exchange had already taken place. The deal — still under negotiation — could include filmmaker Oleg Sentsov, who was convicted by Moscow in 2015 of terrorism. 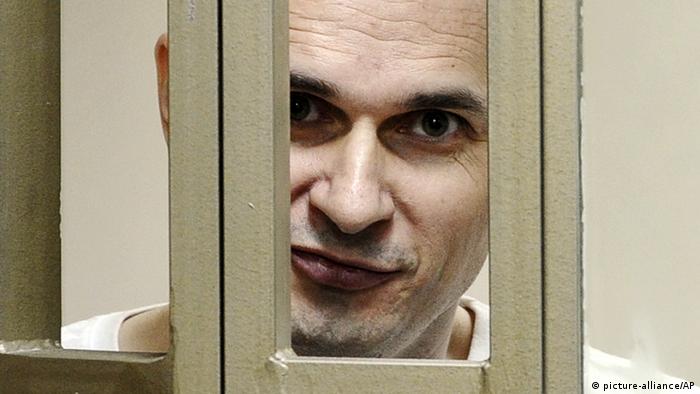 Ukrainian National Security Service press secretary Olena Hitlianska said a landmark prisoner swap between Russia and Ukraine would not go through on Friday, hours after the exchange was expected to take place.

In an interview with local media outlet Obozrevatel, Hitlianska said "everything is going according to plan" although the swap had yet to be completed.

Earlier in the day, the office of Ukrainian President Volodymyr Zelenskiy said the much-anticipated swap had yet to take place because both parties were still negotiating parts of the deal.

"The process of the prisoner swap is ongoing," the president's office said in a statement, refuting a social media post from a Ukrainian lawmaker that the deal was complete.

Politician Anna Islamova had said that Ukrainian filmmaker Oleg Sentsov, who was serving a 20-year jail term in Russia on terrorism charges, is part of the arrangement.

She said the deal also included the freeing of several Ukrainian sailors seized in November last year by the Russian coastguard as they attempted to pass from the Black Sea into the Sea of Azov, along with activists Mykola Karpyuk, Volodymyr Balukh, and Pavlo Hryb.

However, the Ukrainian government did not confirm details of the exchange.

Rumors about the impending prisoner swap have swirled after a Ukrainian court released a jailed Russian journalist on parole earlier this week, and several high-profile Ukrainian prisoners, including filmmaker Sentsov, were transferred from far-flung Russian prison colonies to Moscow.

Sentsov has become a symbol of Ukraine's defiance of the Kremlin's hostility towards its neighbor.

In the wake of Russia's 2014 annexation of the Crimea Peninsula, the filmmaker was arrested and convicted by Moscow for plotting and carrying out attacks there. Human rights groups said the charges levied against him were fabricated.

Sentsov, who went on a 144-day hunger strike in protest of Russia's human rights record, has become Ukraine's best-known political prisoner after he was sent to an Arctic penal colony despite a worldwide drive for his release.

The 24 Ukrainian sailors in Russian custody need to be immediately released, a UN maritime court has ruled. Ukraine's president said Moscow could show its readiness to end the Crimea conflict by releasing the sailors. (25.05.2019)

Servant of the People — a new political party created by President Volodymyr Zelenskiy — has gained a commanding lead in Sunday's parliamentary election. It remains unclear if the party will be able to rule on its own. (22.07.2019)

Last November, Russia seized three Ukrainian navy ships and captured dozens of sailors, sparking outrage in Ukraine. The case is now being heard at a UN sea tribunal in Hamburg, but Russia has vowed not to show. (10.05.2019)