US President Joe Biden said Russian President Vladimir Putin "cannot remain in power" after the invasion of Ukraine. He also warned Russian forces against moving onto "one single inch" of NATO territory.

Biden: 'For God's sake, this man cannot remain in power'

Russian President Vladimir Putin cannot remain in power, and his war against Ukraine has been a strategic failure for Moscow, US President Joe Biden said on Saturday.

"For God's sake, this man cannot remain in power," Biden told a crowd in Warsaw at the end of a two-day trip to Poland.

The unusually strong rhetoric was quickly played down by the White House, which said the president was not calling for regime change in Russia.

"The President's point was that Putin cannot be allowed to exercise power over his neighbors or the region," the official said. "He was not discussing Putin's power in Russia, or regime change."

When the Kremlin was asked about the US president's remark, a spokesperson said "that's not for Biden to decide. The president of Russia is elected by Russians."

During his oftentimes fiery speech, Biden warned Russia against stepping foot on NATO soil but said American forces were stationed in Europe to defend NATO allies, not to engage with Russian forces.

He then cautioned that only "swift and punishing costs" would get Russia to change its course in Ukraine, in a reference to several rounds of sanctions imposed by the West on Moscow.

Biden said the war, now in its second month, had united the West, before telling the Ukrainian people: "We stand with you."

During the speech that was broadcast on Polish TV, Biden also said he was "struck by the generosity of … all the Polish people … opening their hearts and their homes" to help Ukrainian refugees. 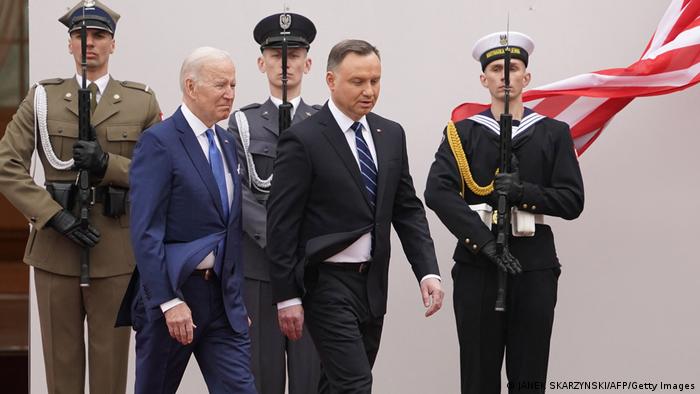 Polish President Andrzej Duda said during his talks with US President Joe Biden, he asked about the possibility of speeding up military purchases

Earlier, Biden held talks with President Andrzej Duda in Warsaw and sought to reassure Poland of Washington's commitment to the defense of Eastern Europe.

He insisted that the NATO mutual defense pact was a "sacred commitment."

"I'm confident that Vladimir Putin was counting on dividing NATO," Biden said about the Russian president. "But he hasn't been able to do it. We've all stayed together.''

As the largest NATO member in the former eastern bloc, Poland is playing a key role in the Western response to Russia's invasion.

Warsaw has called for NATO peacekeepers on the ground in Ukraine, which Washington has rejected.

Duda, meanwhile, said he had asked Biden about the possibility of speeding up military purchases, referring to purchases of Patriot missile systems, artillery rocket systems, F-35 jets and Abrams tanks.

Biden also responded to speculation that Russia has changed its military strategy, after Moscow said its focus was now to completely "liberate" the breakaway eastern Ukrainian region of Donbas.

"I am not sure they have," Biden said when asked by a reporter if Russia had altered its course.

Earlier, Biden dropped in on talks between US, Polish and Ukrainian government officials about the global response to the conflict. 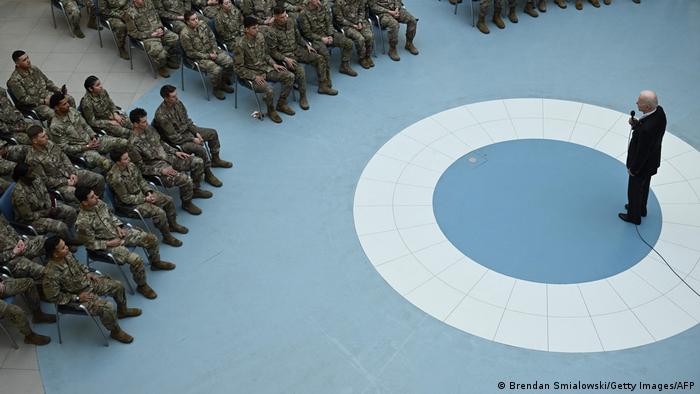 On Friday, Biden spoke to US soldiers stationed around 100 kilometers from the border with Ukraine

The US president also accompanied Polish Prime Minister Mateusz Morawiecki and Warsaw Mayor Rafal Trzaskowski to Warsaw's National Stadium, where Ukrainian refugees are being registered and provided with aid.

Poland has taken in more than 2.2 million out of an estimated 3.5 million refugees who have fled Ukraine since the Russian invasion began more than a month ago.

Asked what he thought of Putin after meeting the refugees, Biden said: "He's a butcher."

After arriving in Poland on Friday, Biden visited a refugee center near the southeastern city of Rzeszow, about 70 kilometers (45 miles) from the Ukrainian border.

Biden's visit to Poland follows his appearance at a trio of summits in Brussels on Thursday.

Can the US stop the war in Ukraine?

Poland and the United States: Warsaw and its 'big brother'

Debate about Polish fighter jets for Ukraine was divisive — and distracting

Poland's proposal to send MIG-29 fighter jets to Ukraine proved highly controversial. How would the plan work? How would Russia respond? Was the whole debate a diversion tactic?

Biden: 'For God's sake, this man cannot remain in power'