UK trade minister: NHS not 'up for sale'

Liz Truss dismissed the notion that a US-UK trade deal would lead to the privatization of the National Health Service. Truss promised to free the UK's trade partnerships from the "EU straitjacket" of regulations. 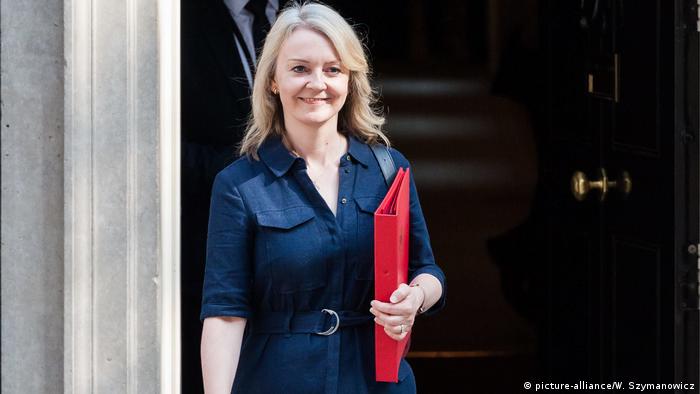 In an opinion piece published in The Telegraph on Sunday, the UK's Conservative trade minister, Liz Truss, said the country's National Health Service (NHS) would not be put "up for sale" in a trade deal with the US.

The trade minister made the pledge regarding the future of the NHS as she prepares to travel to the US to discuss plans for a free-trade deal.

"My main priority now will be agreeing a free-trade deal with the US, building on the successful phone call between the prime minister [Boris Johnson] and President Trump," she wrote.

"I want to make it clear that that will never mean putting our NHS up for sale," Truss added.

Trump: NHS would be part of trade talks

A potential US-UK trade deal has been widely discussed since Trump met with former Prime Minister Theresa May in London earlier this year.

The US president told reporters during the trip that everything, including NHS, was on the table when it came to trade negotiations.

Despite the government's strong rebuke, the opposition Labour party reacted to the comments by denouncing what they saw as the Conservatives' plan to destroy the NHS after the country leaves the European Union.

As Johnson entered office last week, Labour leader Jeremy Corbyn said: "Johnson's no-deal Brexit would mean job cuts, higher prices in the shops, and risk our NHS being sold off to US corporations in a sweetheart deal with Donald Trump."

Truss was optimistic about the future of the UK's trade relations. "For too long, Britain has been tied to an inward-looking, protectionist EU bloc," she said.

"As Trade Secretary for a truly independent free-trading nation, I will be enthusiastically banging the drum for free trade," she added.

Under Johnson, she said the UK would maintain existing trade agreements but also take advantage of new opportunities, especially with countries that belong to the Commonwealth.

She said £85 billion worth of trade deals were already in the works and that these would be carried out whether the UK exited the EU with a deal or without one on October 31.

Truss did not provide details of what those trade agreements would look like.

But she promised that the government would "make sure that our regulation is more flexible than the EU straitjacket" to bolster the UK's technology and financial services sectors.