The British prime minister has vowed to push through Brexit — even without a deal. Boris Johnson has backed an October 31 deadline to leave the EU, calling it the beginning of a "new golden age for the United Kingdom." 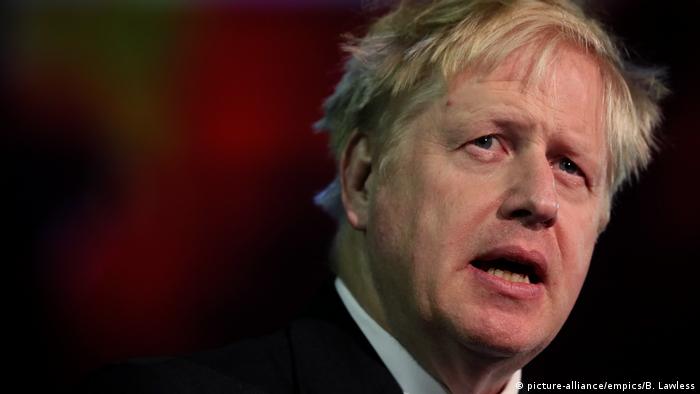 British Prime Minister Boris Johnson on Thursday told Parliament that he was committed to the October 31 deadline to leave the EU "for the purpose of uniting and re-energizing our great United Kingdom and making this country the greatest place on earth."

"I would prefer us to leave the EU with a deal. I believe it is possible even at this late stage [to negotiate a deal]," Johnson said. "But certain things must be clear: the Withdrawal Agreement agreed by my predecessor has been rejected three times by this House."

He called for negotiating new terms with the EU, but said that they would not include the Northern Irish backstop, seen as a precondition for any deal by the EU and particularly the Republic of Ireland.

Johnson said preparing for a no-deal Brexit is a "top priority" for his government. "It is about having a clear economic strategy in all scenarios," he said.

"Today is the first day of a new approach, which will end with our exit from the European Union on October 31," Johnson said. "We will look back on this period, this extraordinary period, as the beginning of a new golden age for our United Kingdom."

But opposition Labour leader Jeremy Corbyn hit back, saying Britons "do not trust this prime minister to make the right decisions."

"He has hastily thrown together a hard-right Cabinet," Corbyn said. "If the prime minister has confidence in his plan, he should go back to the people with that plan. Labour will oppose any deal that fails to protect jobs, workers rights or environmental protections."

If there were a second referendum, Corbyn said the Labour party would support remaining in the EU over a Conservative-brokered Brexit or a no-deal Brexit. Johnson said Corbyn — for decades one of Labour's most outspoken euroskeptics — had been convinced "by his honorable friends" and was now a "Remainer."

Johnson had earlier told his Cabinet members that "we have a momentous task ahead" in preparing to leave the EU.

"At a pivotal moment in our country's history we are now committed, all of us, to leaving the European Union on October 31 or indeed earlier, no ifs, no buts," Johnson said.

The opposition Labour Party has rejected an attempt by the Liberal Democrats to table a no-confidence vote in Parliament, saying it would "only strengthen Boris Johnson's hand."

Parliament is set to adjourn until September after Thursday's session. Nevertheless, Johnson told the Cabinet that his new government "would not wait" in its bid to ready an EU exit in less than 100 days.