Veteran London correspondent for German daily newspaper, Die Welt, Thomas Kielinger talks to Deutsche Welle about the riots in Britain and the lack of parallels that he sees to the situation in German cities. 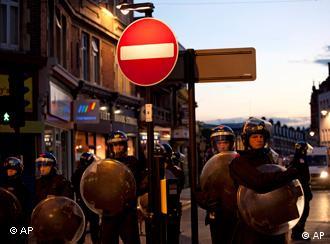 Kielinger doesn't expect riot police on the streets of Berlin

After four nights of rioting primarily in London but also in other cities like Birmingham, Manchester and Liverpool, questions remain over who started ransacking Britain's streets, and why they did so.

Deutsche Welle spoke with veteran newspaper correspondent Thomas Kielinger in London, who has worked for the newspaper German Die Welt from the British capital for over two decades, even earning the title of Officer of the Order of the British Empire (OBE) from Queen Elizabeth II in the course of his duties.

Deutsche Welle: Is there a chance that the kind of rioting we have seen on UK streets in the past few days could also take place here in Germany?

Thomas Kielinger: Clearly on this scale, I doubt very much whether it could repeat itself in Germany. We have had outbreaks of violence and public disorder, of course, in Germany. We have had these unfortunate incidents of cars being burnt and houses looted in Berlin and other cities like Hamburg; but those were isolated incidents of a criminal minority who just had a lot of fun doing this damage to property.

Now London, or rather Britain, is a different kettle of fish. You have more than just criminal incidents, you have a whole underclass of youngsters coming from ghettos that are not integrated or integrateable, so to speak, into British society. They are left alone to fester without a job, without motivation, without family values, they are growing up essentially disconnected from the mainstream of modern British society. And they have no incentive to invest in the country to which they are not connected, so they are just waiting for some sort of pretext to go and storm the urban scene and show society what they can do if they act in a coordinated manner. This is really a deep, festering problem of the underclass at the bottom of Britain's social ladder, which I don't think exists to quite such a vast extent in other countries.

But there are people who talk about the integration problem in Germany, in certain parts of Berlin and other cities. Isn't that possible here as well? Many people would say they don't really feel invested in this society. 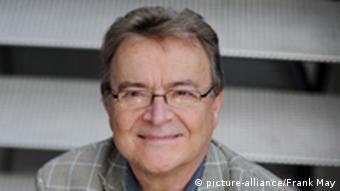 You have to remember that the violence we've seen in British cities is just another addition to the already-existing violence which you find in those disenfranchised groups to a far higher degree than in places like Berlin or Frankfurt. For example, the London police have a special corps created around violent crimes in the black community, like knife or gun crimes, called "Trident." About 20 or so teenagers are killed every year in London alone in gangland crimes, and on top of this, now even erstwhile rival gangs connect and combine to assault the civil order of this country.

Prime Minister Cameron on Wednesday spoke of a gang problem in Britain. He also alluded to the police not having to worry about political correctness, maybe using rubber bullets. Do you think this would be a fundamental change in how law enforcement is conducted in Britain?

It looks very possible. Don't forget the police have been restrained in the last few years in their reactions by a report, which came out 12 years ago, accusing Scotland Yard of institutional racism. There has been this underlying sense of political correctness suggesting that poor black youths are being maligned by white police and other forces, and so have to be careful not to enflame the situation further. That has now been found to be totally false.

The violence we have seen in London or elsewhere is not a reaction of disenfranchisement or resentment among youngsters towards the system. It is attributable wholly to the fact that they come from completely broken backgrounds, where there's no guidance, no parenting, no values imparted from one generation to the other. So yes, I do think we're looking at a key change in the way police will react to public disorder of this kind in the future.

Britain searches for answers as calm returns to the streets

Relative calm has returned to England. Rain and a huge police operation are thought to have averted a fifth night of rioting. The prime minister was expected to face tough questions at an emergency session of Parliament. (11.08.2011)

It's been six years since France experienced riots similar to what is now happening in Britain. Despite a police crackdown and money for social programs, the situation in France's suburban ghettos has hardly changed. (10.08.2011)

Britain's premier pledges to fight back after fourth night of riots

Prime Minister David Cameron has promised to reclaim the streets after riots spread across England for a fourth night. Cameron has sanctioned the use of water cannons to end the "despicable violence." (10.08.2011)