Boris Johnson is not everyone's cup of tea. He divides opinion among many Brits almost as much as Brexit itself. The schism was evident on the UK front pages that marked his anointment as successor to Theresa May. 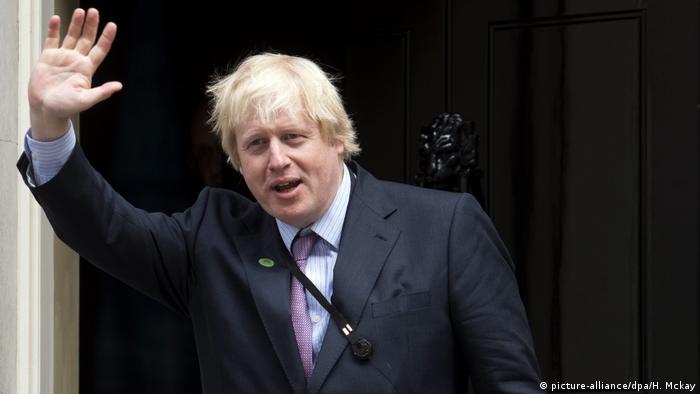 UK's newspaper subeditors had ample time to compose the front pages that would mark a new era in British politics.

It was seen as a fait accompli weeks ago thatBoris Johnson would beat his rival Jeremy Hunt to succeed Theresa May as Britain's next Brexit prime minister. In the meantime, headline writers have allowed their imaginations to run wild — tempered only by political affiliation.

Accordingly, Johnson was broadly lampooned as a clown, denounced as a villain, or hailed as the new savior of Brexit on Wednesday morning.

The left-leaning Daily Mirror, for example, focused on Johnson's reputation for jokey publicity stunts, and bemoaned the fact that he would be Number 10 Downing Street's next occupant.

"It's really not funny any more…" went the front-page headline.

"Mr Johnson will need more than luck,” she added.

Meanwhile, the right-of-center Daily Express gleefully pronounced Johnson's imminent arrival in the top job as a wind of change.

"Hang on to your hats…Here comes Boris!”

"EU bureaucrats and doom-mongers be warned," the front-page strapline advised.

The newspaper's political editor Macer Hall looked forward to the establishment of a "Cabinet for Modern Britain." He predicted new roles for women and those from ethnic minorities, in a government that would "showcase all the talents."

The Daily Telegraph, which has been foremost in cheerleading for Johnson, a former correspondent and hitherto columnist, recalled Johnson's victory speech.

"I'm the dude," said the headline, referring to Johnson use of the word in a quip during his address to party colleagues.

The newspaper featured a full-length photo of Johnson delivering a trademark wacky salute. It also carried a column from former UKIP leader Nigel Farage, whose Brexit Party has offered to work with the Conservatives to deliver Britain's exit from the EU by the end of October.

"With my party's help, we can resolve Brexit," Farage opined.

The traditionally left-wing Guardian newspaper posed a question in its headline.

"An ambition is fulfilled. But what next for Britain?"

Guardian columnist Rafael Behr said Britain warned that Johnson could prove ineffective in office, but be difficult to dislodge.

"Recent history offers ample proof that incompetent leadership can endure with the help of a ruthless praetorian guard, a regiment of loyal fans and disorganized enemies," said Behr.

Nowhere was the split on Johnson better summed up than by the Sun and its sister newspaper in Scotland. England's best-selling tabloid The Sun riffed excitedly on the Beatles classic "Hey Jude” with a splash headline  "Hey Dude!"

"Boris Johnson now has a thumping ­mandate from his party and the potential to be a fantastic Prime Minister. But his task is monumental — and he has to be smarter about it than his predecessor," ran the editorial.

However, the Scottish Sun took a different tone, given that Johnson, and Brexit, poll far less well with voters, and readers, north of the border.

While the English edition basked in Johnson's moment of glory — "Bojo is our new PM!" — its Scottish version adopted a Disney "Toy Story" theme to warn of "Blundering Bojo" and "No Deal Chaos."

The UK as a whole voted narrowly in favor of leaving the EU but Scotland voted by a considerable margin to stay in the bloc.

Scottish National Party leader Nicola Sturgeon vowed to work to block Johnson's plan for a no-deal Brexit, "which would do catastrophic harm to Scotland."

The UK got the news on Tuesday that Boris Johnson is the next Tory party leader and is now set to become the country's new prime minister. Rob Mudge asks how it could all go so horribly wrong. (23.07.2019)

UK pro-EU campaigners hold 'No to Boris' march in London

Anti-Brexit campaigners have marched through central London in a show of opposition to Britain's exit from the EU. Among the attractions was a giant balloon effigy of Britain's likely next prime minister, Boris Johnson. (20.07.2019)